Saint March 24 : St. Oscar Romero the Archbishop of El Salvador who was Martyred while Celebrating Mass 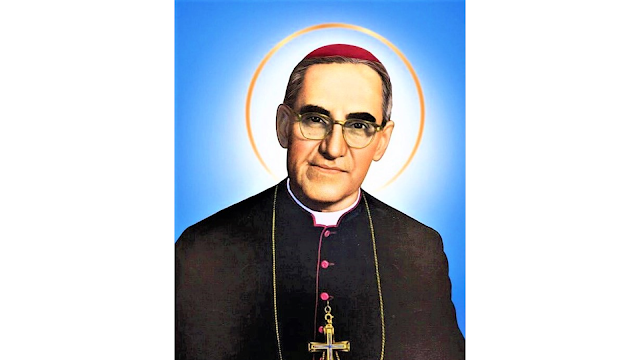 Centenary of his birth marked on 15 August 2017

On 7 March 2018 Pope Francis approved a miracle attributed to him, clearing the way for Romero to be canonised.

Prayer: Christ of the margins, Help us to recognize you in the faces of the poorest and most vulnerable people. Be with us as we gather together and pray that your justice will reign throughout the earth. We pray that we may, in the spirit of Blessed Oscar Romero, be courageous enough to speak out on behalf of those who face injustice, no matter the cost. In your name we pray. Amen

He was assassinated on Monday March 24th 1980 as he was celebrating Mass in the chapel of the Divine Providence cancer hospital where he lived. Thirty five years later, he was declared a martyr of the Church, killed out of hatred of the faith, and was beatified on May 23rd 2015. He was canonised by Pope Francis on October 14th 2018.

Born on August 15th 1917, Oscar Arnulfo Romero y Galdamez was sent to study for the priesthood in Rome and was ordained in April 1942. He embraced a simple lifestyle; he was a popular preacher who responded with real compassion to the plight of the poor.  He gave dedicated pastoral service to the diocese of San Miguel for 25 years – a greatly-admired workaholic in a cassock!

There followed seven years of pastoral famine in the capital city, San Salvador, as an ecclesiastical bureaucrat. Ordained Auxiliary Bishop in 1970, he gained a reputation as a stubborn and reactionary prelate. Seemingly unsympathetic to the new social justice thrust of the Latin American Church, he was suspicious of the clergy and the Base Christian Communities of the archdiocese working alongside the exploited rural poor, promoting social organisations and land reform.

A brief spell back in the countryside as Bishop of Santiago de Maria opened Romero’s eyes as he reconnected to the semi-feudal misery and hardship of the campesinos and witnessed the murderous repression being suffered at the hands of the security forces. In February 1977 he was the surprising choice to be the new Archbishop of San Salvador.

Over the next three years the social and political conflict in El Salvador intensified with electoral fraud blocking change, and peaceful protest being met with massacres and death squad killings. From his Cathedral pulpit Archbishop Romero became the voice of the voiceless poor. There, in a society of cover-up and lies, he spoke the truth of what was happening in the countryside; he denounced the killings, the torture and the disappearances of community leaders; he demanded justice and recompense for the atrocities committed by the army and police and he set up legal aid projects and pastoral programmes to support the victims of the violence. With the emergence of armed guerrilla groups on the far left, civil war loomed. Archbishop Romero, rejecting the violence perpetrated by the left as well as the right, strained every nerve to promote peaceful solutions to his nation’s crisis. He was vilified in the press, attacked and denounced to Rome by Catholics of the wealthy classes, harassed by the security forces and publically opposed by several episcopal colleagues.

The death threats multiplied; the atmosphere was charged. Archbishop Romero realised he was going to be killed. And he came to accept it. At 6.26pm on March 24th 1980, with a single marksman’s bullet, he fell at the foot of a huge crucifix. He died a Eucharistic martyr, a martyr to the option for the poor, a martyr to the Magisterium of the Church – and now recognised as Saint Oscar Romero.