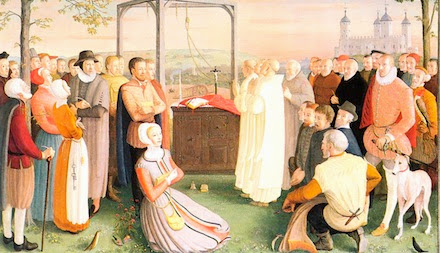 Prayer: Dear Lord, we thank You for giving us St. Margaret Clitherow as an example of holiness. Help us to imitate the love of You she showed in living out her vocation as a wife and mother. St. Margaret Clitherow, you were a loving wife and mother to your husband and your children. Though you faced many tribulations because of your new Catholic Faith, you carried out the duties of your vocation faithfully. Please bring my petitions before God with such faithfulness! Even as the possibility of your own death neared, you were careful to ensure the welfare of your own children by refusing to make a plea for yourself. Pray for me, that I may carry out the duties of my own vocation faithfully. Pray that I may be a holy servant of God in my life. Please also pray for (mention your intentions here). St. Margaret Clitherow, pray for us!  Amen.

Biography:
Martyr, called the "Pearl of York", born about 1556; died 25 March 1586. She was a daughter of Thomas Middleton, Sheriff of York (1564-5), a wax-chandler; married John Clitherow, a wealthy butcher and a chamberlain of the city, in St. Martin's church, Coney St., 8 July, 1571, and lived in the Shambles, a street still unaltered. Converted to the Faith about three years later, she became most fervent, continually risking her life by harbouring and maintaining priests, was frequently imprisoned, sometimes for two years at a time, yet never daunted, and was a model of all virtues. Though her husband belonged to the Established Church, he had a brother a priest, and Margaret provided two chambers, one adjoining her house and a second in another part of the city, where she kept priests hidden and had Mass continually celebrated through the thick of the persecution. Some of her priests were martyred, and Margaret who desired the same grace above all things, used to make secret pilgrimages by night to York Tyburn to pray beneath the gibbet for this intention. Finally arrested on 10 March, 1586, she was committed to the castle. On 14 March, she was arraigned before Judges Clinch and Rhodes and several members of the Council of the North at the York assizes. Her indictment was that she had harboured priests, heard Mass, and the like; but she refused to plead, since the only witnesses against her would be her own little children and servants, whom she could not bear to involve in the guilt of her death. She was therefore condemned to the peine forte et dure, i.e. to be pressed to death. "God be thanked, I am not worthy of so good a death as this", she said. Although she was probably with child, this horrible sentence was carried out on Lady Day, 1586 (Good Friday according to New Style). She had endured an agony of fear the previous night, but was now calm, joyous, and smiling. She walked barefooted to the tollbooth on Ousebridge, for she had sent her hose and shoes to her daughter Anne, in token that she should follow in her steps. She had been tormented by the ministers and even now was urged to confess her crimes. "No, no, Mr. Sheriff, I die for the love of my Lord Jesu", she answered. She was laid on the ground, a sharp stone beneath her back, her hands stretched out in the form of a cross and bound to two posts. Then a door was placed upon her, which was weighted down till she was crushed to death. Her last words during an agony of fifteen minutes, were "Jesu! Jesu! Jesu! have mercy on me!" Her right hand is preserved at St. Mary's Convent, York, but the resting-place of her sacred body is not known. Her sons Henry and William became priests, and her daughter Anne a nun at St. Ursula's, Louvain.
Her life, written by her confessor, John Mush, exists in two versions. The earlier has been edited by Father John Morris, S.J., in his "Troubles of our Catholic Forefathers", third series (London, 1877). The later manuscript, now at York Convent, was published by W. Nicholson, of Thelwall Hall, Cheshire (London, Derby, 1849), with portrait: "Life and Death of Margaret Clitherow the martyr of York". It also contains the "History of Mrs. Margaret Ward and Mrs. Anne Line, Martyrs". [Note: St. Margaret Clitherow was canonized by Pope Paul VI in 1970. IMAGE SOURCE GOOGLE IMAGES