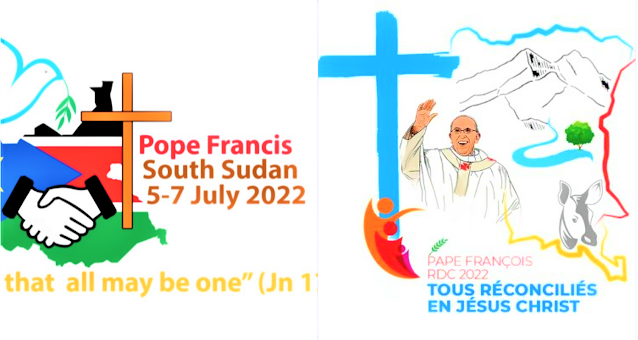 The Vatican has Released the Logos and Mottos for Pope Francis' Trip to Republic of Congo and South Sudan in Africa.
"All reconciled in Jesus Christ" is the motto of Pope Francis' Apostolic Journey to the Democratic Republic of Congo from the 2nd to 5th of July, 2022. The journey's logo features symbols of the nation and an image of the Pope giving his blessing. (pictured on the right above)
Pope Francis will travel to the African nation to visit the cities of Kinshasa and Goma. The Holy See Press Office released the information, along with the icon of the logo for what will be the Pope's 37th Apostolic Journey outside Italy.
The colors of the flag display yellow, symbolizing the richness of the Democratic Republic of Congo with its fauna and flora, terrestrial and subterranean. The red color on the eastern border represents the blood shed by the martyrs in that area. The blue color on the northern border expresse the ardent desire for peace the Congolese people.
On the left side a blue cross reflects the devotion of the Congolese people to the Virgin Mary, the Madonna of Congo, who carries and supports the prayers of the whole nation to Christ the Redeemer.

South Sudan:
"I pray that all may be one" is the motto that will accompany the Pope’s Apostolic Journey from the 5th to 7th of July in Juba, South Sudan.
The Holy Father following his visit to the Democratic Republic of Congo will proceed to South Sudan.
The motto is taken from a chapter generally known as the Farewell Prayer or the High Priestly Prayer of Jesus in the Gospel of John chapter 17.
The logo contains a dove, the outline of the map of South Sudan with the colours of the flag, the cross, and two clasping hands in a firm handshake.
The dove is placed above the map's contours, carrying an olive branch to represent the desire for peace.
In the centre of the map are two shaking hands representing the reconciliation of the various ethnic tribes that make up one nation.
On the right is the cross representing the country's Christian heritage and its history of suffering.
Edited from Vatican News