Worldwide Thousands Join in Prayer and Fasting for Ukraine - Archbishop in Ukraine says "God, accept our fast and our prayer...May life conquer death...may the common prayer of the whole world bring peace to Ukraine" 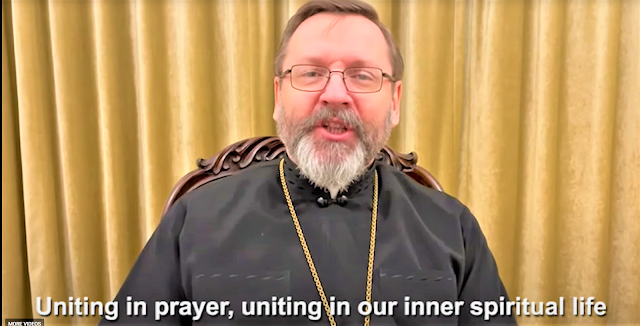 On March 2, 2022, at the call of the Holy Father Pope Francis, the whole world was called to unite in prayer and fasting for peace in Ukraine.
Head of the UGCC (Ukrainian Catholic Church): "Today we are fasting and praying to expel the devil, the spirit of war and death"
At least 7,000 people took part in the prayer at the same time during the day, and more than 30,000 people attended the rosary prayer at 8 p.m.
His Beatitude Sviatoslav, Father and Head of the Ukrainian Greek Catholic Church, said this in his daily video address from Kyiv.
On March 2, on the World Day of Prayer and Fasting for Peace in Ukraine, Live Television held a seven-hour prayer service of the Ukrainian Greek Catholic Church "Ukraine under the protection of the Mother of God." His Beatitude Sviatoslav, Father and Head of the UGCC, concluded it with a prayer on the rosary, asking the Mother of God for intercession for Ukraine, its defenders and the entire Ukrainian people.
Pope Francis said: "We are close to the people suffering from the bombing"
The head of the UGCC prayed on the rosary from the Kyiv bomb shelter.
"Today, with this common rosary that unites us all, we end the day of prayer and fasting for peace in Ukraine, which the Holy Father proclaimed for the whole world," His Beatitude said in the preface to the prayer.
"But this prayer, even in such circumstances, is so precious in God's eyes. And we believe that prayer and fasting for peace in Ukraine from the whole Church and the whole world will be pleasing to God. We also pray for the conversion of our enemies - those who bomb, shoot at us, kill us, for the conversion of Russia, as requested by the Mother of God of Fatima in her proclamation to the little shepherdesses in 1917. "
Prayers, akathists, rosary prayers and other prayers were broadcast from these places during the day. Between the online broadcasts of the services, the bishops of the Synod of Bishops of the UGCC Bishops in Ukraine addressed the worshipers.
The head of the UGCC thanked all those who joined in the common prayer for Ukraine and wished strength and faith in the victory of good over evil:
"We thank all those who have united with us in prayer today. We pray and thank God for all the gifts we have received, for every minute of our lives. And let us give every moment to the glory of God and for the good of our neighbors. May God protect Ukraine, the Ukrainian people and the Ukrainian army. Have mercy on all the wounded, all the refugees, all those in the hostile environment. May God grant freedom and peace to Ukraine. "But today we are united in prayer. “What does it mean to unite in prayer? In recent days, we have said that only when we are united, united, will we be strong and able to survive this war, he said. - "The unity of the strength of the people. God, give us unity, ”says the national anthem. However, unity in prayer is something deeper. To unite in prayer means to share life. It means sharing your life force with your neighbor, giving it to your neighbor. And so to become stronger because of the life force we receive from those who unite with me in prayer. ”
His Beatitude Sviatoslav noted that these days many letters have been sent to us from all over the world with the assurance: we are with you.
"We need that mutual reinforcement today. For this power, this union, is nothing but the power and unity of the Holy Spirit. By uniting in prayer, by uniting our inner spiritual life with the world, we realize ourselves as sons and daughters of the one Church of Christ, the body of Christ, of which He is the Head. On this day, we pray and fast together, "he said.
His Beatitude Sviatoslav also calls for fasting, because "in this way we will show solidarity with those who do not have enough food today." “Fasting is very important. It means getting rid of everything that divides us, that hinders us, and at the same time share our lives with others. That is why this fast is so important today to expel the one who divides - the devil, the spirit of war, the spirit of death, "said the Primate of the UGCC.
“God, accept our fast and our prayer. God, unite us all. May life conquer death. And may the common prayer of the whole world bring peace to Ukraine, "he asked.
Combined posts Edited from : http://news.ugcc.ua/