Archbishop in Ukraine Laments that Rape is Being Used as a Weapon "...during the war we see that sexuality is not used for love, but for war. Who would have imagined that sexuality could be turned into a weapon of humiliation..." 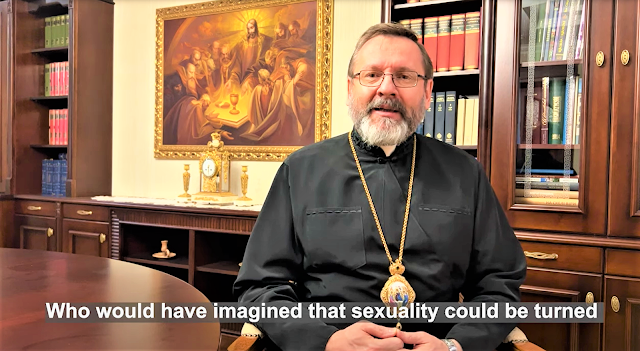 His Beatitude Sviatoslav, Father and Head of the Ukrainian Greek Catholic Church, said this in his daily  address:

Glory to Jesus Christ !
Dear brothers and sisters in Christ! Today is Wednesday, April 13, 2022, and this is the 49th day of heroic popular resistance of the Ukrainian people against the Russian invader who is trampling our land.
Over the past day and last night, Ukraine has once again shuddered at the new crimes being committed on our land. Yesterday our heroic Kharkiv was subjected to new heavy shelling. People were forced to flee their neighborhoods because bombs, rockets and other weapons were fired at their homes. The latest type of weapon was used: bombs were dropped from parachutes, they did not explode immediately, but only when someone approached them.
Today, Ukraine is becoming the most polluted territory in the world when it comes to explosive pollution, and this is a real disaster that will haunt us for years. But this morning we saw another crime against civilians. The Russian occupiers are deliberately bombing and shelling the evacuation routes of civilians. The missile smashed a railway station in the center of Ukraine - the enemy is destroying the nodes where we are trying to help people get out of battle. People, ordinary people, are the first target of those who seek to kill Ukraine today.
However, Ukraine stands. Ukraine is struggling. Ukraine surprises the world with its humane face. Ukraine at the front with weapons in its hands and in the rear by social service, volunteering serves life, saves lives and builds peace.
Today I would like to reflect on the sixth commandment of God, which says, "Thou shalt not commit adultery!" The content of this commandment protects the dignity of man's special vocation - to love and pass on this life to God.
The Lord God created each of us not only called to love, but also able to fulfill that calling. He created each of us as a man or a woman. And it is through our sexuality, which marks our body, our psyche and our spiritual life, that the Lord God invites us to come out of loneliness to meet another person. The meaning of the vocation, which is written in the depths of this sacrament of being a man or a woman, is revealed when a person loves.
According to the tradition of the Church, there are two ways to realize this vocation to love, and thus to reveal the secret of one's sexuality. This is marriage and consecrated life. The Lord God has given us sexuality in order to love and therefore to go to the fullness of life in love and to pass on new life in a blessed marriage to future generations.
However, during the war we see that sexuality is not used for love, but for war. Who would have imagined that sexuality could be turned into a weapon of humiliation of another, weaker person and become an instrument of violence.
We are now exposing the heinous crimes of sexual violence as a weapon against civilians, innocent people. Hundreds of cases of rape of women, men and children ... Yesterday our President told about a case of rape of a baby. We ask ourselves: God, how can we remain human in the midst of that hell? And we understand that only by the power of God are we able to prevent the distortion of our human way of communicating and living.
God bless our men and women. Bless our spouses. Bless those who, even during the war, cultivate marital love, fidelity, inseparability of married life. Bless all those who are not afraid to have children even during the war. Lord, save all those who turn the gift of your sexuality into an instrument of war and sexual violence. God, save Ukraine from sin, from hatred towards those who despise us. Give us the strength to love. God bless our army, bless our heroic Ukrainian people.
May the Lord's blessings be upon you, by His grace and love of man, always, now, and always, and forever and ever. Amen.
Source: UGCC Youtube Channel