#BreakingNews Catholic Priest Attacked with Knife is Saved by Nun who Called it a Miraculous Intervention, in France 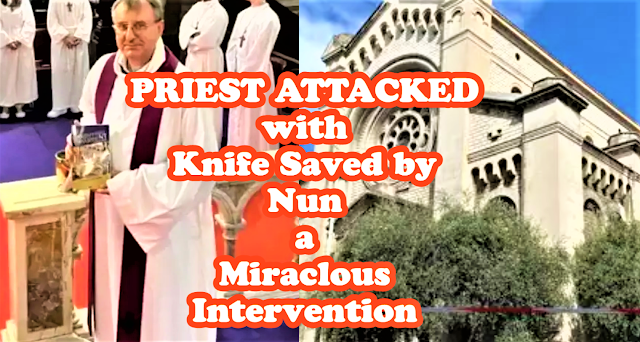 A man attacked a Catholic priest and a nun this Sunday morning at the Saint-Pierre d'Arène church in Nice, France. He was arrested, the two victims are injured, but their lives are not in danger.
The Saint-Pierre d'Arène church was the scene of a knife attack on Sunday, April 24, 2022 in Nice, France.
The mayor of Nice Christian Estrosi was on site.
This assault took place shortly before the start of Mass around 10:30 a.m. A man armed with a knife rushed at Polish Father Krzysztof Rudzinski. The priest's life was saved thanks to the intervention of a nun, Sister Marie-Claude. She is also injured in the hand and taken to hospital.
According to RTL, Sister Marie-Claude believes a miraculous intervention prevented Fr. Krzysztof's death:
"I think with the grace of the Lord, because it is regularly asked for. I think there was a supernatural intervention that stopped him because he had everything for both to stab me in the carotid or in the heart and the same for Father Christophe. He stopped. Why? I don't know, "she said to RTL. 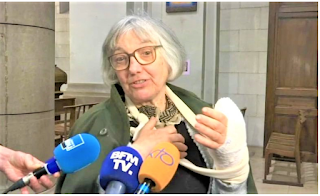 The attacker was immediately arrested jointly by the municipal and national police. According to the investigation, it is a man born in 1991 in the Var in Fréjus. He is in his thirties and lives in Nice.
According to the authorities, he is being followed for psychiatric disorders and has no criminal record.
When he was arrested, he told the police that he was Jewish. He also quickly justified his act. According to the Interior Ministry, he said he wanted to "kill Emmanuel Macron" on election day, but ultimately fell back on a church.
The mayor of Nice Christian Estrosi said that this gesture could be premeditated since, according to the elected official, the suspect bought a seven cm long knife a few days ago. However "caution is essential" recalls the Public Prosecutor of Nice. The investigation is therefore continuing to clarify the motivations of this individual.
In this same region of France, Fr. Jacques Hamel, a French Catholic priest who served in Saint-Étienne-du-Rouvray, was murdered during the 2016 Normandy church attack. Fr. Hamel was killed by two Muslim men pledging allegiance to the Islamic State of Iraq and the Levant while Hamel celebrated Mass in his church.
Sources: https://france3-regions.francetvinfo.fr/provence-alpes-cote-d-azur/alpes-maritimes/nice/attaque-au-couteau-a-l-eglise-saint-pierre-d-arene-de-nice-un-individu-interpelle-2530416.html
https://www.rtl.fr/actu/justice-faits-divers/document-rtl-agression-dans-une-eglise-a-nice-je-saignais-beaucoup-le-pere-krzysztof-etait-par-terre-raconte-soeur-marie-claude-7900148096