Head of the Catholic Church in Ukraine says there is “A Mountain of corpses, rivers of blood, sea of tears..." on the 40th Day of War with Russia 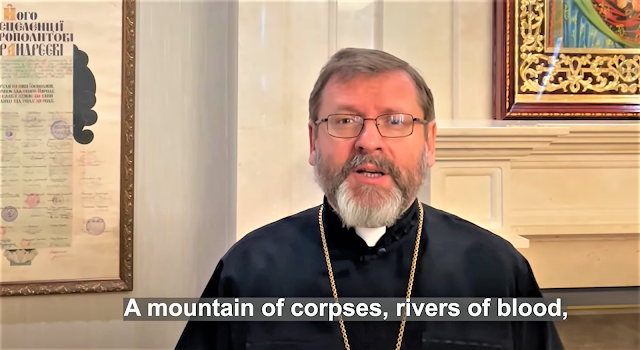 This message of His Beatitude Sviatoslav, Father and Head of the Ukrainian Greek Catholic Church, in his daily military video address on the 40th day of Russia's war against Ukraine.
Glory to Jesus Christ!
"Let's look for a job, because the right to work belongs to the dignity of the human person. I appeal to those who accept forcibly displaced persons: let us create conditions for them to work with dignity so that we can strengthen our state, ”the Head of the UGCC urged.
The bishop remarked: “A Mountain of corpses, rivers of blood, sea of tears - these are the three phrases that describe the icon of modern Ukraine. And the depth of this pain is only growing every day. " His Beatitude Sviatoslav noted that the war continues, bloody battles continue in the north, east and south of Ukraine. The so-called missile terrorism continues. Every night, Russian cruise missiles fire on our cities, destroying homes, killing people, and destroying the critical infrastructure of Ukraine's economy.
This night struck on Ternopil, Odessa, Nikolaev. "Ukraine is suffering but struggling. Ukraine shows the whole world that there are some values, such as love for the Motherland and neighbor, for which it is worth giving one's life, because it is the road to immortality. We increasingly feel that Ukraine's struggle is a spiritual struggle against evil, the devil and his servants, "said the spiritual leader of Ukrainians.
The head of the Church remarked: in order to overcome evil, it is not enough to fight against sin, it is necessary to affirm and do good. It is not enough to complain about the darkness, you need to light at least one candle. Evil can be successfully fought by good deeds.
He said with regret that we see horrible footage, images of everything that the occupier left on Ukrainian soil. We see the burials of people who were shot in the back of the head. We see destroyed cities and villages, mutilated human destinies.
"That's why we have to get to work and fight. If the enemy kills us, sows death, then we serve life, honor human life from conception to his natural death. We see that the enemy is robbing Ukrainians, robbing, looting… And let us be benefactors, be generous and support those who need deeds of Christian charity, ”the Primate encourages.
The head of the UGCC called for work and construction. We must not only survive on the battlefield, but also rebuild and heal our fifty percent-affected economy.
"Spring in Ukraine. We will do everything to make the sowing campaign take place. After all, the Ukrainian land is ready to feed our people. We just need to make our efforts and efforts, "His Beatitude Sviatoslav urged.
Glory to Jesus Christ!
Source : UGCC Youtube Channel