Holy Thursday Explained in 3 Minutes - What You Need to Know! Last Supper of Jesus as in the Bible with Church Traditions - VIDEO 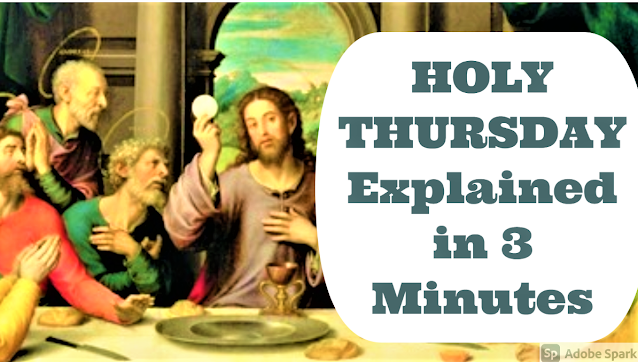 Holy Thursday or Maundy Thursday begins the Easter Triduum which includes Good Friday, the Easter Vigil and Easter Day. It starts with the evening Mass of the Lord's Supper. This commemorates when the Eucharist was instituted at the Last Supper by Jesus as mentioned in the Bible. "And He took bread, gave thanks and broke it, and gave it to them, saying, “This is My body which is given for you; do this in remembrance of Me.” (Gospel of Luke chapter 22)

The Gospel reading for the liturgy explains that Jesus washed the feet of the disciples, an act of service (commonly done by slaves or servants during the time) and great humility. In the evening liturgy, the priest, who is persona Christi, will wash the feet of several parishioners, oftentimes catechumens and candidates who will be entering into full communion with the Church at Easter Vigil. The celebrant ceremonially washes the feet of 12 people in memory of Christ’s washing the feet of his disciples.

Earlier on Holy Thursday (or earlier in the week) the bishop celebrates the Chrism Mass, where holy oils are blessed and ordained priests renew their promises to faithfully fulfill their office. The chrism and the oil is to be used in the celebration of the sacraments of initiation in churches throughout the diocese.  Only the bishop can bless the holy chrism oils.

The "Gloria in excelsis" hymn is sung on Holy Thursday although during Lent it is not used. Bells may be rung, and should remain silent until the "Gloria in excelsis" of the Easter Vigil. During this same period the organ and other musical instruments may be used only for the purpose of supporting the singing.

During the evening liturgy the hosts are consecrated for the communion on Good Friday (when there is no liturgy).

After the Mass of the Lord's Supper the faithful are encouraged to spend time during the night in the church in prayer of adoration before the Blessed Sacrament which has been solemnly reserved.

After Mass the altar is stripped of the linens. Often crosses in the church be covered with a red or purple veil, unless they have already been veiled on the Saturday before the Fifth Sunday of Lent.