Major Archbishop in Ukraine Appeal "Do everything possible to save people's lives!" 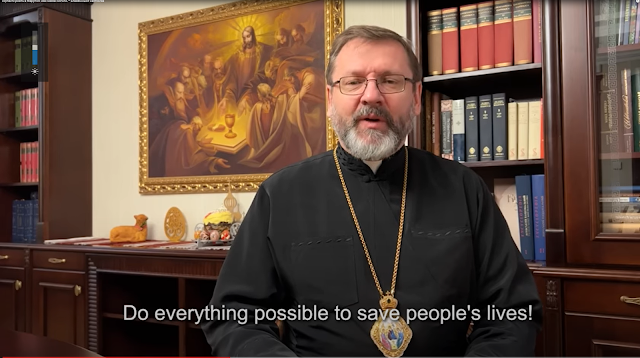 The head of the UGCC on the 61st day of the war: "The occupiers are digging new mass graves in Mariupol"
Monday, April 25, 2022
We see another big problem - the occupiers are dismantling our factories and enterprises en masse in the territories they have occupied. They are being exported to Russia, but those factories are being turned into concentration camps. His Beatitude Sviatoslav, Father and Head of the Ukrainian Greek Catholic Church, said this in his daily military address on the 61st day of the war.
In those camps, the Primate added, so-called filtering operations are carried out - some are shot, others are deported to Russia, and others are forcibly mobilized into the Russian army.
His Beatitude Sviatoslav noted that we, on the one hand, experience the joy of Easter, and on the other hand, we see how the enemy does not stop killing for a moment, even on these holy days.
"In particular, yesterday, tonight," he said, "the enemy destroyed our Poltava region again with missile strikes. He tried to attack troops along the entire front line. And we mourn for those people who live in the immediate vicinity of these war zones. "
The wounded Kharkiv is crying, said the head of the Church, who continues to be fired upon, even from the territory of the Russian Federation. Explosions and bombs have been heard there for the past day.
"We are worried and praying for the heroic Mariupol, which has been standing for three months now and which is truly a martyr city. We see the occupier in the city starting to dig new graves for thousands of people, whom he dumps to those mass graves, "said the spiritual leader.
Azovstal, this former giant of the metallurgical industry of Ukraine, said His Beatitude Sviatoslav, has become a fortress. In his dungeons are a huge number of people. There are children who have not seen the sun for a month. Mariupol cries out to the world: "Stop this war! Do everything you can to save people's lives. "
"The Ukrainian people are calling to heaven and to the world for solidarity, for salvation, for help. But Ukraine is worth it! Ukraine is fighting! Ukraine celebrates Easter! ” - stated the Head of the UGCC.
Text Source: http://ugcc.ua/ and UGCC Youtube Channel