Major Catholic Archbishop of Ukraine says "...Russia, together with its artillery, missiles and heavy weapons, brought mobile crematoria to Mariupol, where they burn innocent civilians killed..." 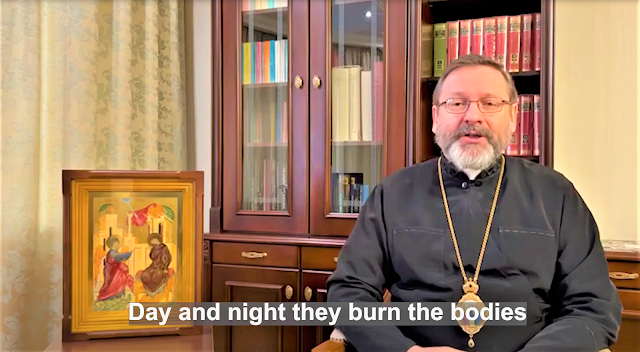 This message of His Beatitude Sviatoslav, Father and Head of the Ukrainian Greek Catholic Church, in his daily military video address on the 43rd day of Russia's war against Ukraine.
Glory to Jesus Christ!
Dear brothers and sisters in Christ!
Today is April 7, 2022 and Ukraine is experiencing the 43rd day of the terrible war. But Ukraine is struggling. Moreover, Ukraine is fighting for the right to life. Not only for their children and their people, but the right to life and respect for the life of every human being in today's turbulent world.
Today in Ukraine we celebrate the Feast of the Annunciation of the Blessed Virgin Mary, which our Byzantine tradition calls the beginning of our salvation.
Two weeks ago, on this holiday according to the Gregorian calendar, Pope Francis dedicated Ukraine and Russia to the Immaculate Heart of Mary. In his speech on the Annunciation, the events of the visit of the angel Gabriel to the Blessed Virgin Mary in Nazareth, the Holy Father mentioned three words: rejoice, do not be afraid, the Holy Spirit will descend on you and the power of the Most High will overshadow you.
What is the good news of God's logic? God comes to incarnate, to become human, to take on human history with all its dramas. But he comes to say to all of us: rejoice.
When we are afraid because of loneliness, the feeling of abandonment among the tragedies of the world, God tells us: Do not be afraid! When we feel powerless in the fight against evil, God says: The power of the Most High will overshadow you. Feast of the Annunciation during the war. In fact, today it is the key, the beginning, that is, the source, the salvation of the Ukrainian people from the murderous Russian hand. These days, Ukraine and the world are once again shaking, revealing the war crimes of the Russian occupier.
Yesterday we learned that Russia, together with its artillery, missiles and heavy weapons, brought mobile crematoria to Mariupol, where they burn innocent civilians killed day and night. Russia, together with the army, brought death, the logic of death and war, and destruction to our lands. Europe saw this type of crematorium near civilian cities only during World War II in Maidanek, Auschwitz and other famous Nazi concentration camps. The smoke of the crematorium rises again to the heavens from the Ukrainian land. And this ideology of the final destruction of the Ukrainian people, numbering almost sixty million, repeats the Nazi patterns of death, the foundations of a new order. But today, seeing those two logics - the Divine and the human - the logic of life and the logic of death, we still accept the logic of Divine power and ask: Lord, let the Holy Spirit descend on us! May the power of the Most High overshadow us! And just as after the Annunciation the Virgin Mary hurried to Elizabeth's aid, we ask on this holiday: save us, hurry to help Ukraine! May the power of the Almighty save the future of Ukraine and the world.
Source : UGCC Youtube Channel