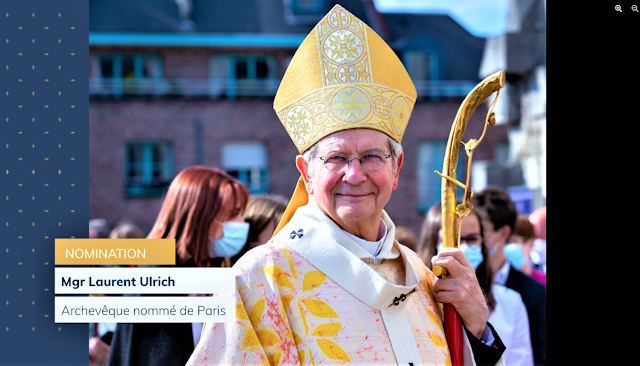 Resignations and appointments, 26.04.2022
Appointment of the Metropolitan Archbishop of Paris (France)

HE Mons. Laurent Ulrich was born on 7 September 1951 in Dijon, in the Metropolitan Archdiocese of the same name. He obtained a MA in Philosophy from the University of his city, attended the Saint-Irénée University Seminary and a Licentiate in Theology from the Université Catholique de Lyon .

He has held the following positions: Deputy Parish Priest in the Beaune sector (1980-1984) and Deputy Dean (1984-1985); Episcopal Vicar in charge of ongoing formation, sacramental and liturgical pastoral care (1985-1990) and since 1986 also for the laity and religious engaged in pastoral care; Vicar General and Delegate for the Apostolate of the Laity (1990-2000).

Elected Archbishop of Chambéry and Bishop of Saint-Jean-de-Maurienne et Tarentaise on 6 June 2000, he was consecrated on 10 September. On 1 February 2008 he was appointed Archbishop-Bishop of Lille, becoming Metropolitan Archbishop on 29 March, when the See of Lille was elevated to the status of Metropolitan.

Within the French Episcopal Conference, he is President of the Council for Catholic Teaching.

https://press.vatican.va/content/salastampa/it/bollettino/pubblico/2022/04/26/0293/00621.html
MESSAGE FROM BISHOP ULRICH 🔸 To all the diocesan men and women of Lille

To all the inhabitants of this territory
Monday, April 25, 2022
Dear friends,
The rumor preceded the announcement which will be public this Tuesday, April 26 at noon: the Pope asks me to continue my episcopal ministry in Paris. This news surprised me a lot! Surprise indeed: because of my age, and the energy it will take to accomplish this new task, I had not even imagined that such a thing could happen to me. I have – why hide it? – a lot of internal resistance asking me if I really had the required abilities… But the language of God, whom one cannot interpret too hastily, has imposed himself on me: the call which comes from Him is formulated not by me, but by the Bishop of Rome in the name of his charge over the universal Church. And as a sign, peace came to me when I oriented myself towards a positive response. I have always found joy deep within me, "the joy of believing" as you well know, by doing what was asked of me by the Church in the name of the Lord. As I leave you, I want to say a huge thank you. For fourteen years, I have admired what is your mark of people from the North: the relational simplicity, the courage to constantly take up the necessary tasks, the multiple and multifaceted commitments in the service of justice and fraternity, the respectful cohabitation opinions and beliefs, not without debates or clashes of course; the taste for shared prayer and living liturgies. I liked the magnificent events lived together: the “centenary years of the diocese” which gave it, I believe, more cohesion, especially around the cathedral as the mother church, with the celebrations and the confirmations; the thematic pastoral visits of catechesis, that of working-class neighborhoods with the fine gathering “Osons la Fraternité” at the Maison Paul VI, and that of the parish animation teams; the provincial council lived with the dioceses of Arras and Cambrai which opened, in the midst of the general feeling of the reduction of our forces and our influence in society, new perspectives. Crises have also troubled us: that of sexual and spiritual abuse, abuse of power and the COVID health crisis; each has claimed victims and each, in its own way, has upset us. Together we faced it with lucidity and dignity, with new attention for victims and vulnerable people. These tough times are also part of the memory that we share: I implore the Lord to sustain our faithfulness in trials and temptations. I would like to express my particular gratitude to the three auxiliary bishops who have succeeded one another at my side, Mgr Pascal Delannoy, Mgr Gérard Coliche and Mgr Antoine Hérouard, and to the current vicar general, Father Bruno Cazin: all four have spent themselves without counting .
My gratitude goes to all of you priests, deacons, lay people in ecclesial mission, consecrated men and women, lay volunteers, particularly to all the collaborators of the episcopal council, the presbyteral council, the pastoral council, all the councils and all the teams, at the diocesan level as well as at the local level, the parish and decanal teams for example, who have invested themselves with generosity in the service of the mission. The task here is not finished, you know it as well as I; the interruption due to my departure cannot also hide my shortcomings, errors and faults for which I ask forgiveness. It is not for me to set the objectives of the episcopate of my future successor. You must certainly prepare for a few months without a bishop: the Church which is in the diocese of Lille will assume, I am sure, this absence with calm and wisdom. The Lord does not abandon him. I will be received in Paris on Monday, May 23, at 6:30 p.m., at the Saint Sulpice church; this will then be the end of my mission here. However, I will come to preside over the Diocesan Gathering “All in chorus with Jesus” on Sunday June 12 at the Roubaix sports park. Many of us will be there, I hope, to demonstrate that we believe that families are the first place of the Church's mission, of the discovery of Christian life, of learning to live with Christ.
I will not forget you, my heart remains attached to you, I will pray for you. Pray for me and for the Church that awaits me.
† Laurent Ulrich, appointed Archbishop of Paris