Pope Francis Meets with 55 Métis from Canada and Repeats Apology 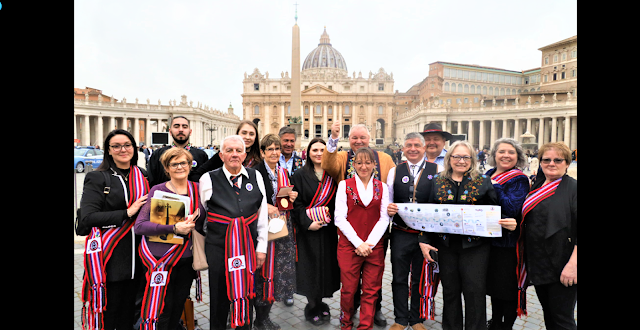 Canadian Bishops welcome Pope's apology to Indigenous peoples
During an audience on 1 April, in the presence of the Catholic Bishops of Canada, the Pope asked for forgiveness and expressed his "indignation and shame" for the abuse suffered by so many indigenous people in Canada.
It was a powerful message that the indigenous peoples had been awaiting for decades.

David Chartrand, President of the Manitoba Métis, had already expressed his gratitude for the Pope's words:
"Like all indigenous people in Canada, particularly those of us who have suffered harm at the hands of individuals who have hidden their wrongdoings behind the Catholic Church, I was relieved to hear Pope Francis make a heartfelt apology. I know that many Red River Métis have been waiting for this apology for many years. I hope it will help start the healing process and unite us on this journey of reconciliation, revitalization, and renewal," he said.
Chartrand repeated the same words in St. Peter's Square responding to journalists after the Thursday morning meeting in the Clementine Hall.
"Our message," he explained, "was a little different. We certainly appreciated and accepted the Pope's apology, and we talked about reconciliation, but we had a bigger message of hope and renewal."
Tears and compassion
"The tears that were shed, the stories that were shared, His Holiness accepted them with such grace and we were so touched when he asked for forgiveness," the indigenous leader said.
A survivor named Andrew, "who paid a heavy price as a child," was given the opportunity to tell his personal story to the Pope, who was patient, attentive, and emotional: "It touched our hearts to see his compassion."
Gifts that tell the story of a people
The Pope was shown the agreement signed with the Canadian government. He signed a copy, which will be displayed in a museum soon to be inaugurated.
The indigenous people then gifted him with handcrafted works made with beads dating back 300 years.
"Our beadwork tells the story of who we are," Chartrand explained, "We were once known as the 'Flower Beadwork People of the West,' because they didn't know what to call us. They called us half-blood, country people. And so, all of our work has prairie flowers that tell our story."
The delegation also gave the Pope a pair of traditional slippers and some crosses dating back to the 1800s: "He appreciated the kindness of our people," Chartrand said.
The Pope then shook the hands of each and every person present at the audience.
"He got up from his chair and came to us. We saw that he was limping... we told him, 'Sit down, we will come to you.' But it was so good to see the Pope with such energy, enthusiasm, and pride. He touched our hearts, and many of us will not forget him as long as we live. And so it is a great honour for us to have such a forward-thinking Pope. He is first the Pope of God and then of the Vatican."

The audience was also an opportunity for the Manitoba Métis to reiterate their invitation to the Pope (who has emphasized his willingness to travel to Canada, probably in July) to visit the area of Winnepeg and bless the tomb of Louis Riel, an early Métis leader who is considered the founder of the province of Manitoba, and who led the Red River resistance movements seeking to preserve the rights and culture of the people when their land came under Canadian influence.
Edited from a report from Salvatore Cernuzio & Linda Bordoni of Vatican News