Pope Francis Sends Message About the War in Ukraine "All this....forces us not to remain silent...but to raise our voices loudly to pray in God's name for an end to these abominable deeds..." 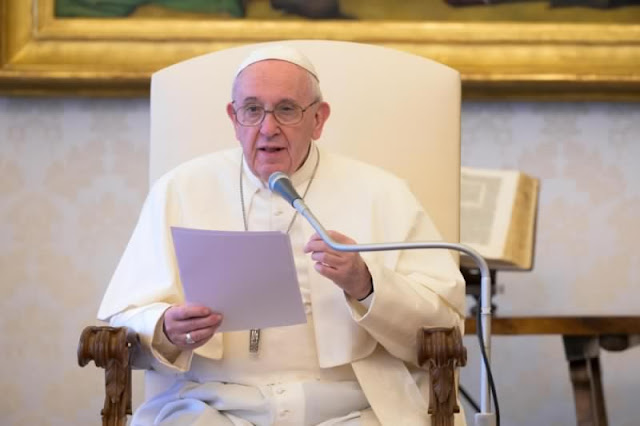 Vatican News reports that during the interfaith meeting at the Chernivtsi Regional Music and Drama Theater, which was attended by delegates from around the world, a message from Pope Francis was delivered.

"The suffering inflicted on many weak and defenseless people; numerous civilians killed and innocent young victims; the desperate flight of women and children ... All this disturbs our conscience and forces us not to remain silent, not to remain indifferent to Cain's violence and Abel's cry, but to raise our voices loudly to pray in God's name for an end to these abominable deeds, ”he wrote. Pope Francis in a message to the participants of the interfaith pilgrimage, which gathered in Chernivtsi representatives of different religions from around the world.

"I feel spiritually close to all of you, brothers and sisters, united by trust and hope in the Almighty Giver and Protector of Life, and I wholeheartedly want to join in begging for the priceless gift of peace for the beloved Ukrainian people," said the head of the Catholic Church. this initiative of a "prayer moment of brotherhood between people of different religions", which helps to strengthen the sense of responsibility of believers in the face of events that undo many of the efforts made in recent decades to build a more peaceful world. According to him, "the cruel and painful events we have witnessed for many days" confirm what is written in the encyclical Fratelli tutti that "war is a failure of politics and humanity, a shameful capitulation, a defeat before the forces of evil."

"Renewing my spiritual participation in your gesture of solidarity, I would like to express my heartfelt gratitude to all those who have joined these days in the many people who have been forced to leave their homes and families," the Pope wrote, wishing human dignity and the sacred dimension human life has always been "the unshakable principle that guides our efforts to achieve brotherhood."

Interreligious pilgrimage of solidarity with the Ukrainian people gathered representatives of religions from around the world, who from April 10, 2022 visited refugee centers and took part in a joint event at the Chernivtsi Regional Music and Drama Theater, which took place on April 12 and testified internally displaced persons, reflections of religious leaders and prayer for peace. "As far as I know, this is the first time that an interfaith delegation has initiated a mission of friendship and solidarity by visiting a war-torn country," said Rabbi Goshen-Gottstein, founder and director of the Elijah Interfaith Institute, which co-organized the event. .

Among the participants in the pilgrimage were the Honored President of the Anglican Commonwealth, Archbishop of Canterbury Rowan Williams, Orthodox Archbishop of the United Kingdom Nikitas Lulias, Rector Major of the Order of Friars Minor. Massimo Fuzarelli, Rabbi Jonathan Wittenberg of the United Kingdom, His Excellency the Grand Mufti Mustafa Ceric of Bosnia and Herzegovina, Grand Imam Yagi Pallavichini of Italy, and Hindus, Buddhists, and other religions.