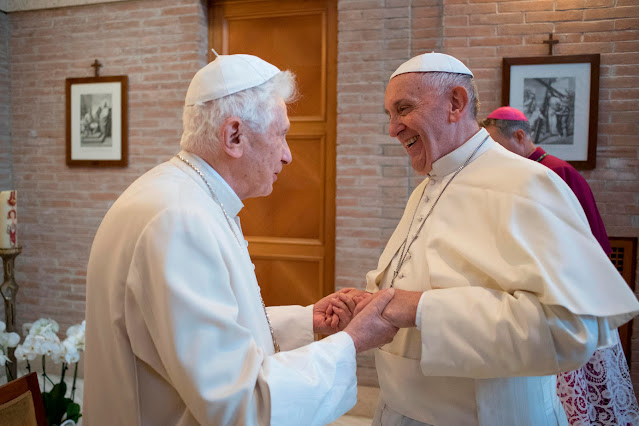 Pope Francis visits Benedict for his 95th birthday. They have an affectionate conversation and pray together.

Vatican News reports that this afternoon, April 13, 2022, around 6 pm, the Pope went to the Mater Ecclesiae monastery, Ratzinger's residence since his resignation in 2013, to personally bring him Easter greetings three days after the Pope Emeritus' birthday on April 16.

A "short and affectionate" conversation, a prayer together. As a well-established custom every Easter and Christmas, this year too Francis wanted to visit the Pope Emeritus, Benedict XVI, to personally bring him greetings for the Easter celebrations but also for the 95th birthday of the Pontiff Emeritus which will be celebrated in three days, April 16. Jorge Mario Bergoglio then went this afternoon around 6 pm to the Mater Ecclesiae, the monastery in the heart of the Vatican Gardens where Joseph Ratzinger has lived since May 2013, three months after his renunciation of the Petrine ministry, leading his days between prayer, music and reading. , assisted by the private secretary, Monsignor Georg Gänswein, and a group of Memores Domini. "After a short and affectionate conversation, and after having prayed together, Pope Francis returned to Casa Santa Marta", informs the director of the Vatican Press Office, Matteo Bruni.

A few days after the Conclave that elected him 266th Successor of Peter, Pope Francis started the 'tradition' of meeting Emeritus Benedict XVI, starting with the first historic visit of the newly elected Pope arrived by helicopter. in the residence of Castel Gandolfo, where Benedict stayed a few weeks before moving to the Vatican.

In view of the holidays or on the occasion of the Consistory with the new cardinals, Francis never wanted to let this gesture of closeness and courtesy go to the one who in an interview on the plane called "a wise grandfather at home" and who in the Angelus of the June 29, 2021, the seventieth anniversary of Ratzinger's priestly ordination, he called "father" and "brother".

Pandemic restrictions  had prevented a the encounter in Easter 2020. However on November 29th, 2020, Pope Francis accompanied the eleven new cardinals created in the consistory of that day on a visit by the Pontiff emeritus. This custom has always been renewed since 2016. The first two years, in fact, in 2014 and 2015, the Pope Emeritus took part in the celebration in St. Peter's Basilica.