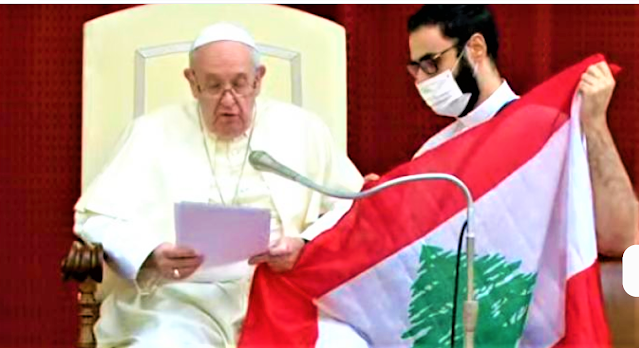 The presidency of Lebanon announced, that Pope Francis will visit the country in June. The Lebanese who have been suffering for two years in an unprecedented economic crisis.

In a statement, the Presidency stated that the Papal Ambassador to Lebanon, Monsignor Joseph Spitry, handed the President of the Republic, Michel Aoun, a "written letter informing him that His Holiness Pope Francis decided to visit Lebanon next June, provided that the date, program and date of the official announcement would be determined, in coordination between Lebanon and the Holy See.

Aoun said, according to the statement, that "the Lebanese have been waiting for this visit for some time, to express their gratitude for the stances of His Holiness towards Lebanon and its people, for the initiatives he took, and for the prayers he made for the establishment of peace and stability in it, and for solidarity with his people in the difficult circumstances they are going through."

During his visit to the island of Cyprus in December, he expressed "grave concern" about the crisis. "When I think of Lebanon, I feel very anxious about the crisis it is facing, and I feel the suffering of a tired and afflicted people with violence and pain," he said in a speech he delivered to the officials of the Maronite Church, whose Patriarch, Bechara Al-Rahi, came from Lebanon to participate in his reception. "I carry in my prayers the desire for peace that springs from the heart of that country," he added.

In August, the Pope called on the international community to provide "concrete initiatives" for Lebanon, a year after the massive explosion that occurred in the port of Beirut, killing more than two hundred people and wounding more than 6,500, causing widespread destruction.

In July, Pope Francis received nine heads of churches in Lebanon at the Vatican. And he sent a message of hope to the Lebanese people, calling on the Lebanese to "not despair."

This is the third visit of a Pontiff to Lebanon since the end of the civil war (1975-1990). In September 2012, Pope Benedict XVI visited the country where he delivered the Apostolic Exhortation for the Church in the Middle East. Pope John Paul II also visited Lebanon on a historic visit in 1997, printed by his phrase "Lebanon is more than a homeland, it is a message."

Officially 18 sects coexist in Lebanon. The Lebanese constitution does not enumerate these sects in detail, but Article 9 of it states that “the freedom of belief is absolute” and “the state respects all religions and sects and guarantees the freedom to practice religious rites under its protection, provided that there is no breach of public order.”