RIP Vicki Thorn - Death of the Pro-Life Hero and Foundress of Project Rachel, Vicki Thorn at 72 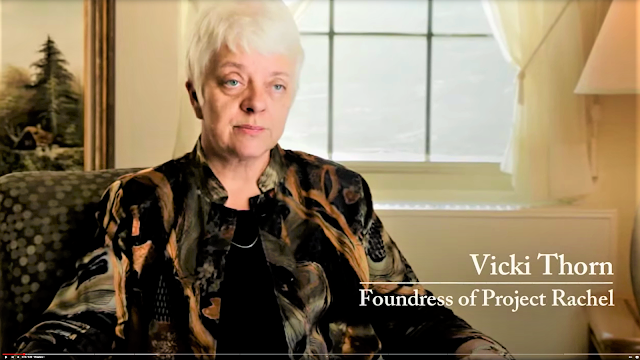 Vicki Thorn, age 72, the founder of Project Rachel in Milwaukee in 1984, has died. She was a pro-life hero who helped thousands of post-abortive women find healing. Originally, she was inspired by a self-destructive friend who had given one child up for adoption and aborted another. The friend said, "I can live with the adoption; I can't live with the abortion."

When she started Project Rachel, a Catholic outreach, Vicki Thorn was a young wife and mother with a B.A. in psychology from the University of Minnesota.

The President @PagliaAbp, the Chancellor msgr. #Pegoraro, all of the Central Bureau share in the family's grief over the death of Victoria Mary (Vicki) #Thorn. On behalf of all the Academicians we thank #Vicki for her life witness. May she rest in peace. https://t.co/cKxZUSQLy5 pic.twitter.com/l8fGIuOpW8

Her credentials also included being a trauma counselor and a facilitator in bereavement loss and prenatal loss.

Vicki was married to, William Thorn. He is associate professor emeritus of journalism and media studies at Marquette University, together they had six children and 17 grandchildren.

Thorn soon became "an expert in a field that didn't exist," she explains. Today over 140 U.S. dioceses have started this post-abortion healing ministry, and it's spreading around the world.

The first training day in Milwaukee was attended by about 60 priests and a few local reporters. "When I started Rachel, I thought it would be a nice little local diocesan project until the next day when it was in all the media," notes Thorn. "I started getting calls from people in other dioceses because we'd all been talking about [post-abortion ministry] for years." She traveled nationally and internationally to speak about her ministry.

Milwaukee's Archbishop Rembert G. Weakland, O.S.B., presented Vicki Thorn with the 2001 Vatican II Award for Distinguished Service to Society for her dedication to helping women and men who have been affected by abortion. The previous year the Catholic Press Association acknowledged her accomplishments by presenting her with the Herald of Charity Award.

Today Project Rachel is a diocesan-based ministry that includes a network of specially trained clergy, spiritual directors and therapists who provide compassionate one-on-one care to people who struggle with the aftermath of abortion. (Some dioceses offer additional components such as retreats and support groups.) That includes women who have had abortions, fathers of aborted babies, grandparents, siblings and others. People seeking information can call their diocese, check their telephone book under "Project Rachel" or contact The National Office of Post-abortion Reconciliation and Healing, Inc. (800-5WE-CARE). In 1990 Vicki Thorn founded The National Office of Post-abortion Reconciliation and Healing (NOPRAH) as an oversight organization to coordinate Project Rachel and other post-abortion services. Since the office is only open part-time, many people leave telephone messages. "The voice mail is always on," notes Thorn, "and we always get back with people, usually within 24 hours."