Saint April 2 : Saint Pedro Calungsod a Young Inspiring Catechist who Loved the Lord and was Martyred in the Philippines 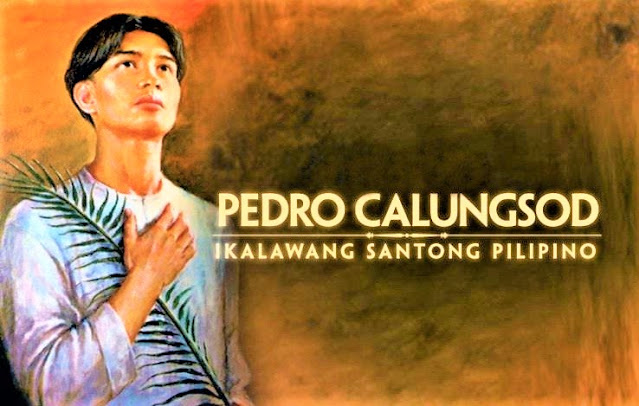 Young Pedro Calungsod loved the Lord.  He was born around 1654 in Visayas, part of the Philippines controlled by the Spanish empire.  He was taught by Spanish Jesuit missionaries there and excelled in the study of the Catechism, so much so that, around the age of 14, he accompanied some of the Jesuit priests — among them, Blessed Diego Luis de San Vitores — and other lay volunteers on a missionary trip to Guam in the Marianas Islands.  San Vitores is credited with establishing the first Catholic Church on the Islands.
Prayer to St. Pedro Calungsod Saint Pedro Calungsod student, catechist, young migrant, missionary, faithful friend, martyr, you inspire us by your fidelity in time of adversity; by your courage in teaching the Faith in the midst of hostility; and by your love in shedding your blood for the sake of the Gospel. Make our prayers your own (pause to mention your intentions) and intercede for us before the throne of Mercy and Grace so that, as we experience the help of Heaven, we may be encouraged to live and proclaim the Gospel here on earth. Amen. (Source : Dominus Est)


Pedro, who served as a sacristan in the church, impressed the group as a devout, prayerful young man who would be a good example to the Islands’ youth whom the missionaries wanted to catechize and bring into the Catholic faith.

Some natives of the Islands were suspicious of the missionaries and spread malicious rumors and stories to discredit them and their teaching among the people.  Among their detractors were certain “medicine men” who feared losing their influence and power over the Island people to the Christian missionaries.

One of these men, a Chinese criminal named Choco exiled to Guam from the Philippines, convinced a small group of natives that the missionaries were poisoning children with baptismal water. According to some accounts, Father Diego and his young assistant Pedro were ambushed one night by Choco’s companions  while responding to the request of a native mother on an island village to have her child baptized,.  Although Pedro could have escaped, he decided to stay with the priest.  They threw a lance at the teenage Pedro which pierced his heart and, then, they killed Father Diego.  Witnesses said that their bodies were stripped, thrown into the sea and never recovered.

Word of their martyrdom spread among the people of the Islands and Father Diego was proposed for canonization by the Jesuits.  At his beatification in 1985, the heroic story of young Pedro caught the attention of Philippine Cardinal Ricardo Vidal and he initiated his cause for canonization.  He was beatified in Rome by Pope St. John Paul II on March 5, 2000.  In his beatification homily, the Pope observed: ... from his childhood, Pedro Calungsod declared himself unwaveringly for Christ and responded generously to his call.  Young people today can draw encouragement and strength from the example of Pedro whose love of Jesus inspired him to devote his teenage years to teaching the faith as a lay catechist. ... In the face of imminent danger, Pedro would not forsake Father Diego, but as a “good soldier of Christ” preferred to die at the missionary’s side.

After a miraculous cure was attributed to his intercession, Pedro’s cause for canonization as a martyr proceeded through the usual Vatican channels until 2012 when he was declared a saint by Pope Benedict XVI.  His feast day is celebrated on April 2.  He was designated as the patron of Filipino youth.

At a time when people flee so easily from the demands of faith and truth, the martyrdom of 17-year-old St. Pedro Calungsod stands out in witness to the steadfastness needed to follow the ultimate sacrifice of the Lord Jesus Christ, who gave his life for us.

St. Pedro Calungsod is proof that sanctity does not require a long life or an early death —-only a life, whatever its length, lived with and for the Lord.  For young people in today’s world, 17-year-old Pedro Calungsod shows them that saints can and do look like them.  St. Pedro Calungsod, pray for the youth of our Diocese and inspire them, like you, to love the Lord.