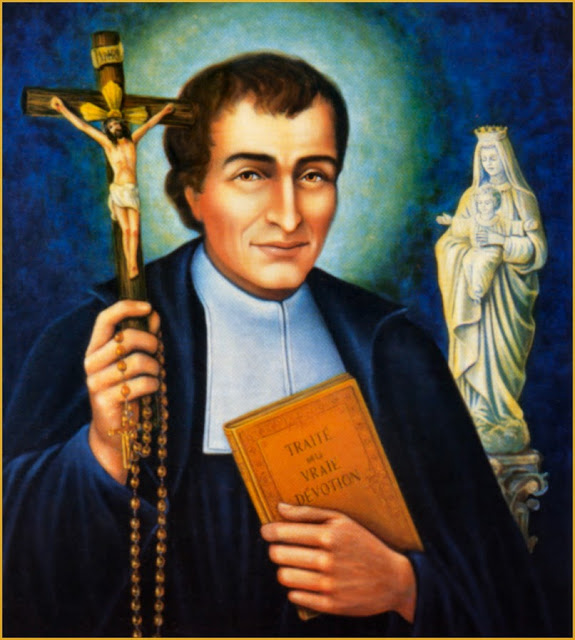 St. Louis de Montfort
CONFESSOR, MARIAN DEVOTEE, FOUNDER
Born:
31 January 1673 at Montfort-La-Cane, Brittany, France
Died:
1716 at Saint-Laurent-sur-Sovre, France
Canonized:
1947 by Pope Pius XII
Missionary in Brittany and Vendee; born at Montfort, 31 January, 1673; died at Saint Laurent sur Sevre, 28 April, 1716.
From his childhood, he was indefatigably devoted to prayer before the Blessed Sacrament, and, when from his twelfth year he was sent as a day pupil to the Jesuit college at Rennes, he never failed to visit the church before and after class. He joined a society of young men who during holidays  ministered to the poor and to the incurables in the hospitals, and read for them edifying books during their meals. At the age of nineteen, he went on foot to Paris to follow the course in theology, gave away on the journey all his money to the poor, exchanged clothing with them, and made a vow to subsist thenceforth only on alms.
He was ordained priest at the age of twenty-seven, and for some time fulfilled the duties of chaplain in a hospital. In 1705, when he was thirty-two, he found his true vocation, and thereafter devoted himself to preaching to the people. During seventeen years he preached the Gospel in countless towns and villages. As an orator he was highly gifted, his language being simple but replete with fire and divine love. His whole life was conspicuous for virtues difficult for modern degeneracy to comprehend: constant prayer, love of the poor, poverty carried to an unheard-of degree, joy in humiliations and persecutions.
The following two instances will illustrate his success. He once gave a mission for the soldiers of the garrison at La Rochelle, and moved by his words, the men wept, and cried aloud for the forgiveness of their sins. In the procession which terminated this mission, an officer walked at the head, barefooted and carrying a banner, and the soldiers, also barefooted, followed, carrying in one hand a crucifix, in the other a rosary, and singing hymns.
Grignion's extraordinary influence was especially apparent in the matter of the calvary at Pontchateau. When he announced his determination of building a monumental calvary on a neighbouring hill, the idea was enthusiastically received by the inhabitants. For fifteen months between two and four hundred peasants worked daily without recompense, and the task had just been completed, when the king commanded that the whole should be demolished, and the land restored to its former condition. The Jansenists had convinced the Governor of Brittany that a fortress capable of affording aid to persons in revolt was being erected, and for several months five hundred peasants, watched by a company of soldiers, were compelled to carry out the work of destruction. Father de Montfort was not disturbed on receiving this humiliating news, exclaiming only: "Blessed be God!"
This was by no means the only trial to which Grignion was subjected. It often happened that the Jansenists, irritated by his success, secure by their intrigues his banishment form the district, in which he was giving a mission. At La Rochelle some wretches put poison into his cup of broth, and, despite the antidote which he swallowed, his health was always impaired. On another occasion, some malefactors hid in a narrow street with the intention of assassinating him, but he had a presentiment of danger and escaped by going by another street. A year before his death, Father de Montfort founded two congregations -- the Sisters of Wisdom, who were to devote themselves to hospital work and the instruction of poor girls, and the Company of Mary, composed of missionaries. He had long cherished these projects but circumstances had hindered their execution, and, humanly speaking, the work appeared to have failed at his death, since these congregations numbered respectively only four sisters and two priests with a few brothers. But the blessed founder, who had on several occasions shown himself possessed of the gift of prophecy, knew that the tree would grow. At the beginning of the twentieth century the Sisters of Wisdom numbered five thousand, and were spread throughout every country; they possessed forty-four houses, and gave instruction to 60,000 children. After the death of its founder, the Company of Mary was governed for 39 years by Father Mulot. He had at first refused to join de Montfort in his missionary labours. "I cannot become a missionary", said he, "for I have been paralysed on one side for years; I have an affection of the lungs which scarcely allows me to breathe, and am indeed so ill that I have no rest day or night." But the holy man, impelled by a sudden inspiration, replied, "As soon as you begin to preach you will be completely cured." And the event justified the prediction. Grignion de Montfort was beatified by Leo XIII in 1888.
SOURCE Stlouisdemontfort.Catholic Encyclopedia
Consecration to Jesus through Mary prayer by St. Louis - VIDEO below: