Ukraine Archbishop says "The last day and the last night were very brutal in Ukraine." 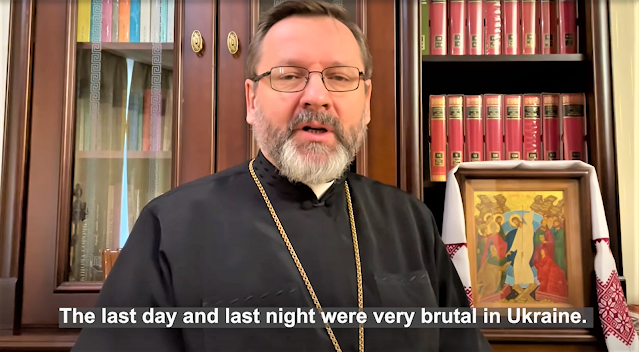 Daily Message of His Beatitude Sviatoslav, Father and Head of the Ukrainian Greek Catholic Church, on their Holy Saturday, April 23, 2022, according to the Julian calendar:

Glory to Jesus Christ!
Dear brothers and sisters in Christ!
Today is Saturday, April 23, 2022, and the Ukrainian people are experiencing the 59th day of nationwide resistance to Russia's military invasion of our homeland, the war against us and our state.
The last day and the last night were very brutal in Ukraine. The enemy is attacking along the entire front line, the eastern and southern parts of Ukraine are on fire. He is constantly firing missiles and bombs at our towns and villages. It seems that the enemy is hunting people. When it comes to the occupied territories, women and children are caught and taken to Russia, and men are forcibly mobilized into the Russian army and forced to fight against the Motherland.
Rivers of blood and a sea of ​​tears… Ukraine's suffering probably reaches heaven. But today Ukraine is experiencing a special day - Holy Saturday. In the spiritual, liturgical life, it is a day of silence, when our Lord and Savior rests in the tomb and in such a wonderful way fulfills the law of Moses on the Sabbath rest.
The tomb is sealed and a military guard is standing next to it. Everything calmed down - in heaven, on earth and under the earth. The cry of the crowd, the clatter of weapons, the cries of the rulers, the cries of those who were crucified and killed were silenced. The Lord rests in the tomb with His body. However, His holy soul descended into the depths of the underworld, to the land of the dead, to hell, to fill everything there. Although the life-giving body of Christ rests in the tomb, it has not parted with the deity, just as His soul, the bearer of God's light and life, breaks the gates of hell and conquers death. The Son of God came down to the land of the dead to fill everything with himself, to give life to those in the tombs. Therefore, the icon of this day is the Descent of Christ into hell, the moment when the Savior meets the dead, takes the hand of our great-grandfather Adam and great-grandmother Eve, takes them out of the tomb and brings them back to life.
On this holy day, we especially think and worry for those who are really in hell, but here on earth. We think and pray for the Ukrainian cities and villages blocked by the occupiers, and we ask the Lord God: “Where we cannot physically come to bring life-saving salvation to our Ukrainian brothers and sisters, come, go down to the Azovstal dungeon in Mariupol. Save the women and children who are in hell and await Your liberating, life-giving hand. "
Today we pray for the Ukrainian army, which sees with its own eyes this deadly fire of Russian weapons, but covers Ukraine with its chest. Thanks to them, our defenders, girls and boys, we now see a new day and at least for a moment we can feel the mysterious silence of Holy Saturday in other parts of Ukraine.
God, you who voluntarily laid yourself in the grave, rise with us! Bless Ukraine, Ukrainian land! Take all of us by the hand and lead our people and our Motherland to Your victory, to Your Resurrection!
The blessing of the Lord be upon you, with His grace and love of man, always, now, and forever and ever. Amen.
Glory to Jesus Christ!