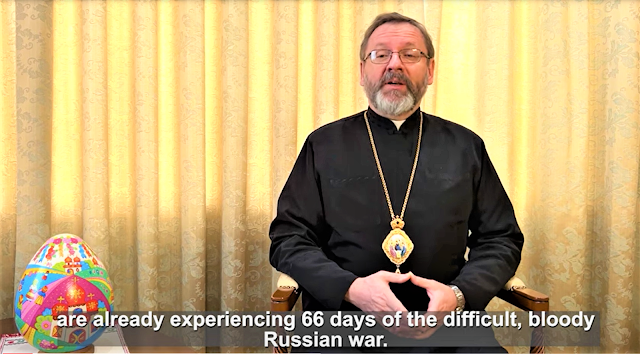 His Beatitude Sviatoslav, Father and Head of the Ukrainian Greek Catholic Church, said this in his daily address on the 66th day of the Russian war against Ukraine.
War is a time of the greatest violence, the greatest ruthlessness, the greatest mockery of another person. We ask ourselves: how to be merciful during a war that is a period of great cruelty? We must show the mercy that the Lord God has done for us.

The Primate noted that the entire east and south of Ukraine were on fire… The enemy partially occupied Kherson, Zaporizhia, Donetsk and Luhansk regions. Heavy fighting is going on near our Kharkiv and Nikolaev. According to the General Staff of the Ukrainian Army, every day the enemy is intensively trying to advance in the east of our country. But it is not very successful and suffers great losses.
The spiritual leader emphasized that the war is a time of great solidarity of our people, a huge open heart.
Nobody asks anyone where you come from, what language you speak or what church you go to ... People try to help each other in everything.
On this day, the Head of the Church reflected on another gospel of bliss, which tells us: "Blessed are the merciful, for they shall obtain mercy."
And when it comes to charity, "blessed are the merciful," we feel that the first to be pardoned, those to whom the Lord God has shown His mercy, are we Christians. It is to us that the Lord God has shown his love. He had mercy on us, accepting us as his sons and daughters and endowing us with the gift of eternal life in the Resurrection of Christ, "said His Beatitude Sviatoslav.
"Through us Christians," says the spiritual leader, "through our charity for others, he wants to have mercy on others. God's mercy is a great manifestation of His love for man. This is a manifestation of the fact that love is the meaning of human life.
The Primate stressed that Ukrainians show mercy even to their enemies who came to kill them: "In the first days of the war, Ukrainians spontaneously, showing mercy to the bodies of killed enemies, appealed to their relatives in Russia were buried. But the Russian occupation forces refused - they refused to be merciful to their own. And they continue to be cruel to our Ukrainian people. "
Source: UGCC Youtube Channel