Ukraine Major Archbishop Warns "about great danger of missile strikes on nuclear power plants in Ukraine, which could be a major nuclear disaster not only for Ukraine, Russia, Belarus but for Europe," 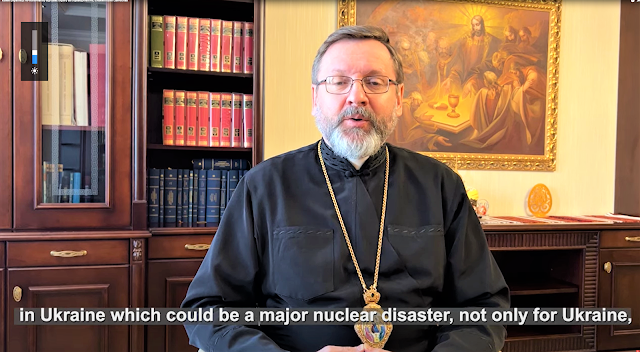 Daily Message of His Beatitude Sviatoslav, Father and Head of the Ukrainian Greek Catholic Church, on their Easter Friday, April 29, 2022, according to the Julian calendar:
We, Ukrainians, are hungry and thirsty for justice and therefore feel blissful. We will be the voice of justice so that the modern world can live in peace. His Beatitude Sviatoslav, Father and Head of the Ukrainian Greek Catholic Church, said this in his daily military address on the 65th day of Russia's war against Ukraine.
"The last good thing was quite difficult and difficult. According to reports from the front, the enemy has intensified attacks in southern and eastern Ukraine. Bloody battles continue in Kharkiv, Luhansk, Donetsk, Kherson and Zaporizhia regions. Last night the enemy launched a massive missile strike on central Ukraine. Kyiv was wounded by five rockets in the very center of the city, "the Primate stated.
"We were moved and concerned by the statement of the International Atomic Energy Agency" IAEA "about the great danger of missile strikes on nuclear power plants in Ukraine, which could be a major nuclear disaster not only for Ukraine, Russia, Belarus but for Europe," he said.
The Head of the Church then offered to reflect on the gospel bliss that Jesus Christ revealed to his disciples in the Sermon on the Mount and which, in his opinion, reveals its meaning in particular at Easter time, on Good Friday - "Blessed are the hungry and thirsty for righteousness. for they shall be filled ”(Matt. 5: 6).
Thirst and hunger, the bishop notes, are natural signs of human life. A person who is thirsty and hungry really needs to meet the basic needs of this earthly life. However, he emphasizes, in this bliss the Lord tears off an even deeper feature of the human being, because everyone is called to eternity. "Indeed, blessed is he who has hunger and thirst for the fullness of life in that eternity. To be hungry and thirsty for justice means to seek holiness. The Lord God calls his people: "Be holy, for I am holy," explains the Head of the Church.
"And here, hunger, thirst, this inner need of holiness - is a feature of those who carry in themselves the germ of resurrection as the grace of Holy Baptism. And it is the Lord God who is the source that quenches man's thirst not only for the needs of his earthly life, but also for eternal life, "said the Primate of the UGCC.
Therefore, blessed are those, says the Father and the Head of the UGCC, who seek true justice. Blessed are those who know how to tell right from wrong. Blessed are those who hunger and thirst for holiness and for the eternity which the Lord God gives us.
His Beatitude Sviatoslav, reflecting on the gospel bliss of hunger and thirst for justice in the context of the war in Ukraine, said that we see blatant injustice, which manifests itself not only in a lack of respect for human dignity, but also in something much worse.
"Recently, our enemies received a textbook on the genocide of the Ukrainian people, which states that Ukrainians as a people do not exist, that Ukrainians are not a people, not a nation, but a Western ideology. The textbook emphasizes that those who do not renounce this ideology and want to maintain their national identity as Ukrainians must be killed or re-educated in concentration camps, "the bishop said, emphasizing:" We feel that the war against Ukraine is ongoing. , has a clear ideological basis and our people are doomed to annihilation by an unjust attacker. That is why today everyone who considers himself a citizen of Ukraine, regardless of which nation he belongs to, has a special thirst for justice. Because peace in the modern world, justice between nations, the truth of our coexistence depend on the extent to which we understand truth and untruth today, justice and lawlessness. "
The Head of the UGCC also noted that the Secretary General of the United Nations was in Kyiv yesterday in Ukraine, arriving as an envoy of peace, he said. He visited Kyiv and Moscow to end the war with the help of international institutions. Five missiles were fired at the center during his stay in Kyiv. This is a contempt for international institutions, for international efforts to bring justice and just peace to Ukraine.
"God bless Ukraine! God bless our army! God bless the children of Ukraine who are forced to leave their homes and flee the war! God bless Ukraine and the world with peace! ” - added the spiritual leader of Ukrainians.
Source: UGCC Youtube Channel