Archbishop in Ukraine Calls on Christians to Shelter the Homeless since "According to the United Nations, more than 12 million Ukrainians have already fled their homes..." 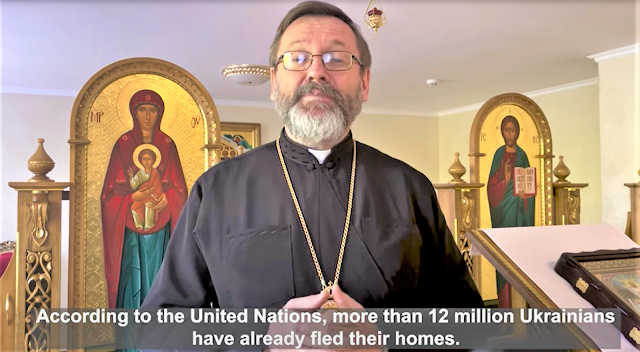 Daily Message of His Beatitude Sviatoslav, Father and Head of the Ukrainian Greek Catholic Church,  May 10, 2022:
Dear brothers and sisters in Christ!
Today, Tuesday, May 10, 2022, Ukraine is already experiencing the 76th day of the brutal war waged by Russia against the Ukrainian people, the Ukrainian State.
Last day and tonight were very difficult in Ukraine. Fierce fighting is taking place along the entire front line in the east and south. They were especially difficult yesterday in Luhansk region, where a large number of troops gathered on both sides and it was impossible to evacuate the civilian population. Odesa and Odesa region were hit by a brutal rocket attack yesterday. Many people were forced to flee their homes and flee the war.
But Ukraine is struggling. Ukraine stands. The Ukrainian army bravely defends the Motherland. And this surprises the whole world. The Ukrainian people are increasingly uniting to, on the one hand, support their army and expel the enemy from their land, and on the other hand, to heal the wounds of this war.
Today I would like to reflect on another very important act of charity for the body of a neighbor - a traveler to take home.
Hospitality to those who travel, special attention and mercy to those who have lost their home and are forced to seek a better fate in a foreign land, have long been one of the important ways of worship. We recall how, receiving three travelers, Patriarch Abraham received God himself in his tent in three persons. Jesus Christ taught His disciples that when He comes a second time in glory, on the throne as a judge, He will say, "I was a traveler, and ye received me." So what we do for the traveler, the hospitality with which we envelop the homeless, is the honor of God himself. Jesus Christ accepts this reverence as shown to Him, our God and Savior.
Now, during the war, millions of Ukrainians have been left homeless. According to the United Nations, more than 12 million Ukrainians have already fled their homes, and more than five million have left their homeland seeking protection and assistance abroad.
Taking this opportunity, I would like to thank all those who opened their hearts and homes to Ukrainian refugees. In this way you honor Christ himself, who is present among you. Special thanks to those of our brothers and sisters in Ukraine who share with the latter for accepting internally displaced persons.
Today, there is probably no free Ukrainian city that does not accept refugees, in the south, north, center, and especially in the west of Ukraine… It is so important that we see in everyone to whom we open our home and who seeks refuge with us , - the person of Christ himself.
John Chrysostom taught his faithful: "What good is it for you to adorn the thrones of God with golden tablecloths, but not to see, not to honor the body of Jesus Christ, present in the beggar who asks for alms on the porch."
Therefore, by receiving and enveloping travelers and refugees, we envelop the body of Christ, which is present in the one whom He sends us as His image and likeness.
Today we want to pray especially for all those who are forced to leave their homes. We especially pray for more than a million Ukrainians who were forcibly expelled from their homeland by the Russians. These people are now in so-called filtration camps, which are, in fact, concentration camps on Russian territory, and from there, after interrogation and torture, they are relocated to the vast expanses of the eastern part of Russia.
God, we thank You that You are present among us in the image of a traveler, in the image of a refugee, in the image of a homeless person. God, we thank You for all those who see You in the image of the one who is now knocking on our doors and hearts in need.
God bless Ukraine! God bless the children of Ukraine! God bless the Ukrainian army! God, give a hundredfold to all those who honor you, our God and Savior, with acts of mercy.