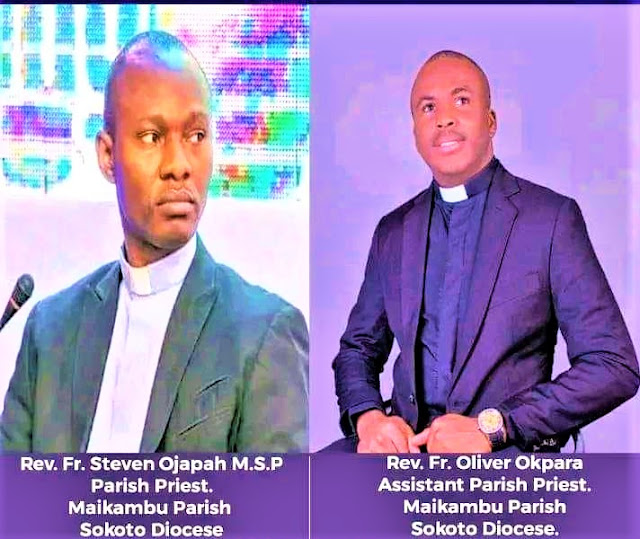 The Catholic Diocese of Sokoto, Nigeria, Africa, released that 2 priests were kidnapped from the area where a Christian College student was stoned to death.
SEE ALSO :

https://www.catholicnewsworld.com/2022/05/breakingnews-christian-student-stoned.html
On Facebook it was reported that, "As at midnight of today, 25th May, 2022, gunmen broke into the rectory of St. Patrick's Catholic Church, Gidan Maikambo, Kafur LGA of Katsina State.
The parish priest and his assistant Rev. Frs. Stephen Ojapah, MSP, & Oliver Okpara and 2 boys in the house were kidnapped. No information as to their whereabouts. Kindly pray for their safety and release. Thank you! - Fr Chris Omotosho (Director, Social Communications). _________ Fr Ojapah is a priest of the Missionary Society of St Paul.
Please keep him, his assistant and the two boys they kidnapped in your prayers.
Fides also released: According to the testimonies collected, the kidnappers, armed, arrived in large numbers, and were not seen riding motorcycles, as is usually the case in attacks for kidnapping of people in Nigeria. Fr. Oliver Okpara was ordained in September by His Exc. Mgr. Mathew Hassan Kukah, Bishop of Sokoto, who was the subject of recent threats. The Bishop had strongly denounced the murder of Deborah Samuel Yakubu, a Christian student, lynched on May 12 for "alleged blasphemy". The diocese of Sokoto headed by Msgr. Kukah fully covers the states of Sokoto and Katsina, and partially those of Zamfara and Kebbi.
(Agenzia Fides, 25/5/2022)
Source: Page of Bishop Moses Idris https://www.facebook.com/Rev-Fr-Moses-Idris-108056535155600