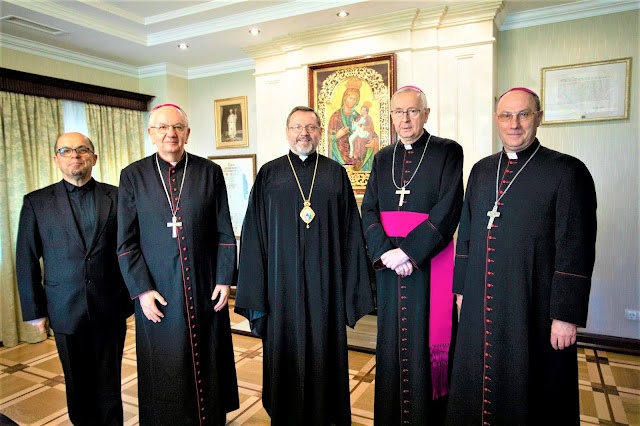 The leading Catholic bishops of Poland made a special visit to Ukraine, in solidarity with the country and to pray for an end to the war. Notably, Archbishop Stanislaw Gadecki gave an interview, after the visit, to a Catholic news service of Poland called KAI. In the interview the archbishop cautions the Vatican about their relations with Russia, here is an excerpt:
KAI: Another important meeting of the bishops in Kiev is a meeting with Archbishop. Paul Gallagher, secretary for relations with states, minister of foreign affairs of the Holy See. I know that Archbishop has comments on the current Eastern policy of the Vatican, having recently presented the Pope with a special memorial on this subject. What are these comments about? Was this mentioned?

In my opinion, the Vatican's approach to Russia should change to a more mature one, as the old and present approach seems very naive and utopian. Of course, the goal is noble, that is to establish contacts and dialogue, which results from the fact that Russia is great and deserves respect. But this is not accompanied by a sufficiently serious reflection on the part of the Vatican. For Russia, the Vatican is an important entity, but at the same time it must be humiliated, as Putin himself has already shown several times, intentionally being several hours late for the scheduled meeting with the Pope. The Holy See should understand that in its relations with Russia - to put it mildly - it should be more careful, because from the experience of Central and Eastern European countries it seems that lying is second nature to Russian diplomacy.

On the other hand, it seems that the countries of Central and Eastern Europe are underappreciated by Vatican diplomacy. We know it well from the past. For decades they have been treated "per nogam". Card. Stefan Wyszyński tried to change it, but I don't think he will succeed. It was rather Providence, his effort and consistency, and not the efforts of the Holy See's diplomacy, that saved the Church in Poland.

Only the pontificate of John Paul II brought a radical change, but now it seems that we are returning to the old line.

KAI: And how can you evaluate the current activities of Vatican diplomacy?

- It must be remembered that the Holy See is always neutral in its diplomatic activity and tries to maintain impartiality in its approach to the fighting parties. Vatican diplomacy - realizing that Christians often fight on both sides - does not indicate one aggressor, but tries to do everything possible to reach a peaceful conclusion through diplomatic efforts. But today, in a situation of war - as Archbishop Shevchuk emphasizes - the most important thing is that the Holy See should support Ukraine at all levels and not be guided by utopian thoughts drawn from the theology of liberation.

FULL TEXT Report of the Polish Bishops Visit to Ukraine (Released by the Bishops' Conference of Poland:

The purpose of the visit was to show that the Roman Catholic Church in Poland stands in solidarity with the fate of these Churches in Ukraine, and to draw attention to the need to pray for those who were murdered - said Archbishop Stanisław Gądecki, chairman of the Polish Episcopal Conference, during a press conference in Poznań, summarizing the visit of Polish bishops to Ukraine, which took place on May 17-20 this year.
In Lviv, Polish bishops met with Archbishop. Mieczysław Mokrzycki, Metropolitan of Lviv. In Kiev, the bishops met, inter alia, with Archbishop. Sviatoslav Szewczuk, Metropolitan of Kiev, and Metropolitan Epiphanius, Primate of the Orthodox Church of Ukraine. The bishops also visited Irpin and Bucha to pray for the murdered Ukrainians. The bishops also met with Archbishop. Paul Gallagher, secretary for relations  with  states  in  the Secretariat of State of  the Holy See.
"We need to show solidarity with these Churches and with this nation that was hit so painfully," stressed the President of the Episcopate. "When there is a war, you have to take the side of the weaker, being aware that numerous troops are involved in the war itself," he added.
“Ukrainians show that in a world without values ​​there is something worthwhile for which one should die. This is a country that is ready to die for freedom, ”noted Archbishop Gądecki. “This is not only a matter for Ukraine, but for Poland and the whole of Europe. Because our fate also depends on whether Ukraine wins or loses "- he emphasized.
"In Ukraine, we met the patrimony of the world," said Archbishop Wojciech Polak, Primate of Poland.
“Bucza and Irpin are places of martyrdom. We prayed in silence in the face of the drama and suffering of these people, which is written on their faces and in their hearts. But we also saw the drama of destruction. The extent of the tragedy we have seen is a tragedy of people expelled and houses destroyed in a barbaric way, ”stated the Primate of Poland.
Archbishop Stanisław Budzik, Metropolitan of Lublin, recalled that the bishops visited two cities, Lviv and Kyiv, and three Churches: the Roman Catholic Church, the Greek Catholic Church, and the Ukrainian Orthodox Church. “These were very valuable meetings. We heard words of gratitude from everyone we met. We have all seen how much they appreciate our presence. Someone said presence is the first name of love. We have experienced ourselves how important it is to be with people who suffer, who are in danger, ”said Archbishop Budzik.
The Lublin metropolitan added that the Ukrainians thanked very much for the help that comes as gifts to Ukraine, as well as for the hospitality of Poles towards the wives and children of the fighting Ukrainians. "It is an encouragement for us to remain ready to help Ukrainians both in Ukraine and here in Poland," he emphasized.
BP KEP
Source: https://episkopat.pl/przewodniczacy-episkopatu-wizyta-biskupow-w-ukrainie-osiagnela-swoj-cel/ and KAI excerpts