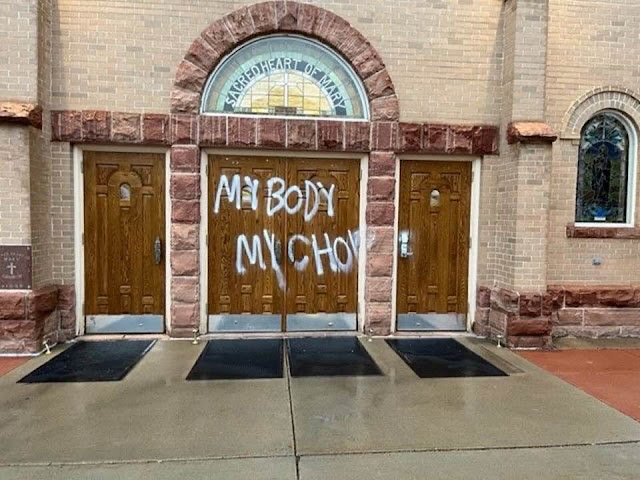 Several news outlets have alerted churches that a pro-abortion group, called “Ruth Sent Us,” announced that it is calling activists to enter Catholic churches during Mass this coming Sunday on Mother's Day. This is in response to reports that the Supreme Court is going to overturn Roe vs. Wade.

Catholic Vote reported that the group "Ruth Sent Us" included a video with the post, which showed activists dressed in Handmaid’s Tale costumes in a sacred building, disrupting worshippers with shouts of “Abortion on demand and without apology!”

Life News reported that, another pro-abortion group, Rise Up 4 Abortion Rights, also is encouraging pro-abortion protests “outside of churches” on Mother’s Day, according to the report.

“Raise your voice and raise hell! Silence is your stamp of approval,” its website states. “Abortion on demand and without apology!”

The website states that protests already are scheduled outside prominent churches in several cities across the U.S. It encouraged protesters to “raise hell,” wear Handmaids Tale outfits and conduct “die-ins.” The group also is planning a huge protest.

The same Ruth Sent Us group earlier this week published the locations of pro-life Supreme Court justices’ private homes, calling on activists to show up at their houses. “We must rise up to force accountability using a diversity of tactics,” the group stated.

A Ruth Sent Us TikTok account uploaded a video of activists marching toward the doors of a Catholic Church. “Sometime a*****es need a beating,” the post stated.

Ruth Sent Us tweeted out another video of protesters interrupting Mass in another sacred building. The activists marched in and stood between the holy altar and the parishioners. “For 2,000 years the Catholic Church has been an institution for the enslavement of women,” shouted one.

“This is what Mother’s Day should look like,” tweeted Ruth Sent Us. “Catholic and Evangelical Churches nationwide.”

CatholicVote Communications Director Joshua Mercer says Catholics throughout the country should be wary and prepared when they attend Mass, especially this coming Sunday.

“In the past, we might have blown off the words of these activists as empty threats. But given the recent rash of very real attacks on Catholic statues and churches, it makes sense to be cautious,” Mercer said.

He added that Ruth Sent Us and other activists are quite explicit about their anti-Catholicism. “If they wanted, they could have just focused on the issue of abortion. But instead they chose to highlight the Catholic faith of some of the pro-life justices,” he said, noting that the radical abortion group called the justices “extremist Catholics.”

CatholicVote has called on Catholics to pray for the justices whose addresses were published. “We’re talking about human beings, with children,” Mercer said. “And this Sunday, keep your eyes open. These are ruthless people, and they’re looking for a confrontation.”

Below readers can view the radical activist group interrupting Mass.