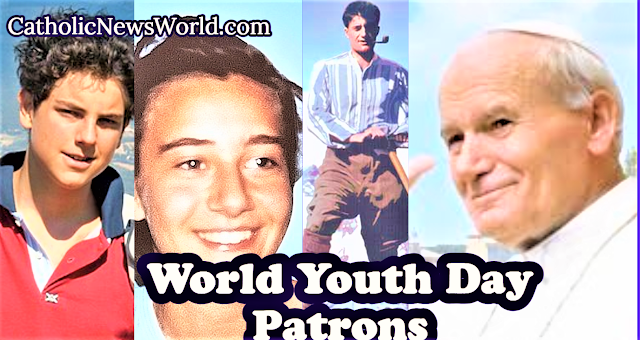 WYD Press Release: On the day we celebrate the birth anniversary of Saint John Paul II (May 18), founder of World Youth Day, the Saints and Blessed Patrons of WYD Lisbon 2023 are announced. The preparation of each World Youth Day, its realization and the dynamism that is imprinted on the meeting of young people from all over the world with the Pope is entrusted to patrons, that is, to canonized saints or in the process of canonization.

For WYD Lisbon 2023, the Local Organizing Committee has proposed 13 patrons, women, men and young people who, as the Cardinal Patriarch affirms, “have shown that life in Christ fills and saves the youth of all times”. These patrons, who were born in the city hosting WYD or come from other countries, are models for young people.


Meet the Patrons of WYD Lisbon 2023 here!
Diocesan Patrons
For the first time, the preparation for WYD Lisbon 2023, which is being carried out in all the dioceses of Portugal thanks to the dynamism of the Diocesan Organizing Committees, is also entrusted to the diocesan patrons of World Youth Day. Thus, each diocese has chosen the saints who are a reference for each diocesan reality and who, with their example and protection, will help in the journey towards WYD Lisbon 2023.