St. Pope John Paul II's Mother Chose Life for Him When Advised to Terminate the Pregnancy by a Doctor 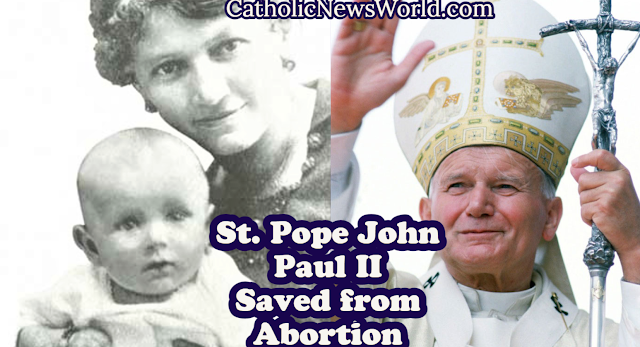 Saint Pope John Paul II's life was in danger before birth. In a book by Milena Kindziuk it was revealed that the future Pope John Paul II was in danger of abortion because of the precarious state of health of his mother Emilia Kaczorowska.
The book, “The Mother of the Pope,” indicates Emilia Kaczorowska, married in 1905 with Karol Wojtyla, the army of the Austro-Hungarian Empire. She then rejected an abortion advised to her by a doctor due to her precarious state of health.  The book was published in Krakow at the Znak publishing house, in 2013. According to Kindziuk, the gynecologist from Wadowice, Jan Moskala, was worried about the life of Wojtyla's mother who in 1906 had her first child Edmund but in 1916 had lost her daughter Olga, who died shortly after giving birth.
When Moskala was informed of Emilia's new pregnancy in 1919, he sternly advised her to save her own life instead of that of the conceived child. "She must have an abortion," Karol Wojtyla's mother would have heard from the doctor, according to Kindziuk.
Aware of the risks, the parents of John Paul II decided otherwise and Emilia gave birth to Karol Wojtyla (later John Paul II) in the house of Wadowice on May 18, 1920. Later, after a long illness, probably rheumatic, the mother of the future pope died on April 13 of the 1929. Three years later, his brother also died of scarlet fever at the age of 26. In February 1941, then, Karol, the father of John Paul II, died. Sources: https://web.archive.org/web/20131019184317/https://vaticaninsider.lastampa.it/nel-mondo/dettaglio-articolo/articolo/wojtyla-wojtyla-wojtyla-28694/