Ukraine Archbishop explains "There is active shelling of the territory of Ukraine...In fact, there is no safe, quiet city or place in our country." 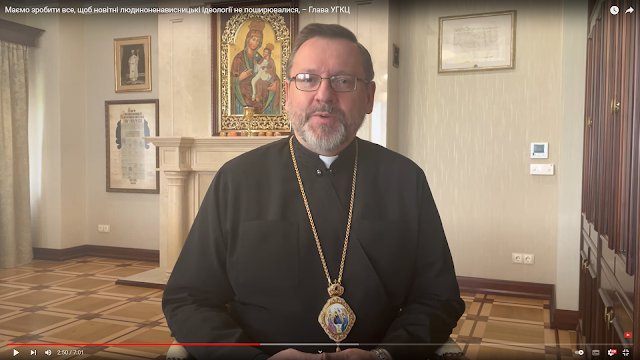 Dear brothers and sisters in Christ!
Today is Sunday, May 22, 2022, and for the 88th day in a row, the Ukrainian people are waging a heroic struggle against the Russian aggressor, who is killing our people, burning our cities and villages, and fighting against our people and our state.
The front line stretched from Kharkiv in the north to Kherson in the south for about three thousand kilometers. About half a million combatants are fighting on both sides and their numbers are growing. Therefore, in terms of scale and number of participants, the war has no equal in the modern world after the end of World War II.
The enemy is conducting active, assault fighting in Luhansk and Donetsk regions. The Ukrainian army is defending itself. However, the enemy continues to fire on peaceful territories in the north of our state, even from its own territory, locating its fighting positions on the other side of the Ukrainian-Russian border.

Yesterday Nikolaev was fired from cluster shells. There is active shelling of the territory of Ukraine with cruise missiles. In fact, there is no safe, quiet city or place in our country.
But Ukraine stands. Ukraine is struggling. Ukraine is praying. Ukraine wins. Ukraine testifies to the truth, not only before God, not only before its brothers and sisters in Ukraine, but also before the whole world - the truth that there are such values ​​for which it is worth living and dying.
Today I would like to reflect on another sin that we attribute to the sins of others - that is, I personally do not commit it, but participate in it and become co-responsible for that evil - and which sounds like this: to incite to sin.
In modern culture, with its latest technologies of communication between people, there are many ways to transmit criminal behavior, how to spread lies and encourage evil. We know that in the war against Ukraine, Russia has used all the power of its ideological machine, which not only destroys the souls of its own citizens, sending them to kill in Ukraine, but also projects evil on the whole world.
This ideology, which now incites to sin and is part of military aggression, is known in the world as the ideology of the Russian measure. She justifies evil and tries in a Christian way to wrap up the current criminal activities of the Russian army in Ukraine. We are very sorry that even Christian leaders not only produce such an ideology, not only incite to evil, but also try to turn that evil into one of the sermons of their Church.
Today we must all stand together against evil. It should be realized that those who preach hatred, encourage murder, justify the war in Ukraine - he becomes co-responsible for those crimes. Anyone who advocates such a sin, as well as one who directly kills the civilian population in Ukraine, is a murderer.
All humanity must make every effort to ensure that the latest misanthropic ideologies do not spread in our educational institutions, societies, and means of communication. We must all serve the good and do everything possible for modern man to learn to do it. Encourage ways of relationships between people that bring goodness, peace and love.
God bless Ukraine! God bless the Ukrainian army, which protects the life and health of Ukrainians and covers Europe and the world with its breasts from the ideology of the Russian measure and everything that destroys the souls and hearts of people. God bless all those who oppose evil, follow the dictates of their own conscience and have the courage to bear witness to the truth.
The blessing of the Lord be upon you, with His grace and love of man, always, now, and forever and ever. Amen.
Christ is Risen! He is Risen Indeed!