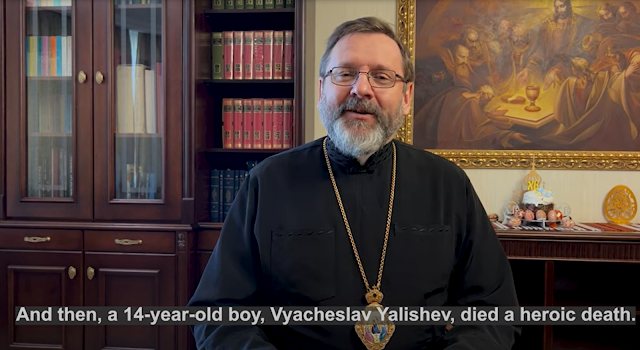 Daily Message of His Beatitude Sviatoslav, Father and Head of the Ukrainian Greek Catholic Church,  May 4, 2022:
Christ is Risen!
Dear brothers and sisters in Christ!
Today is Wednesday, May 4, 2022, and Ukraine is already suffering the 70th day of the brutal war that Russia has unleashed against our Motherland and against our people.
Yesterday our whole country was shaken by high-power missile strikes… In just one evening, 20 cruise missiles were fired at Ukraine, which hit eight regions of Ukraine. We can say that in one evening Ukraine was hit as many missiles as, for example, in Syria during the 11 years of war. We see that a military confrontation of unprecedented strength and intensity since the end of the Second World War is unfolding in our lands.
But the Ukrainian people are showing unprecedented examples of heroism.
Defending the Motherland, the native land, the whole Donbas and the south of Ukraine are under fire. Kharkiv and Mykolayiv were bombed and shelled again. Thank God that several hundred people from Mariupol and Azovstal were rescued. Our defenders courageously hold their positions, although they do not even have the opportunity to evacuate the wounded, who are gradually dying ... The Ukrainian people surprise the world with their heroism, zeal and their love for God and the Motherland.
Let us reflect today on another bliss that is deeply connected to all previous bliss and to the mission of Christians, especially in today's world. Christ says to his disciples, "Blessed are you when people persecute you, despise you, and utter all kinds of evil against you, accusing me of it." The gift of eternal life that we received in Baptism from the risen Christ must be shown to the world. And every time we are persecuted, despised, slandered, persecuted, this gift begins to shine in us more and more for the whole world. 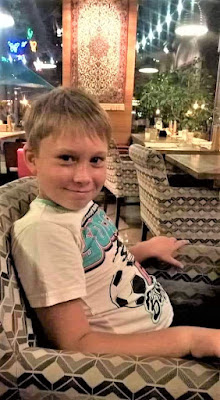 Christ told His disciples, “You will be led before the mighty rulers of this world, and this will give you the opportunity to testify of Me ... Do not worry that you will have to speak before those unjust judges. At that moment, I will give you a wisdom that no one can rely on. " We feel that this is happening and is happening in the destiny of our people and the Ukrainian Greek Catholic Church.
We have already said that the great war is connected with the great untruth. But the Lord God reveals us to the world as a great treasure that shines with His truth, especially when we suffer for the truth, when we witness to Christ in the suffering of Ukraine.
Today I want to remember one dramatic but heroic event. On May 2, our Odesa was once again subjected to a missile attack. A 14-year-old boy, Vyacheslav Yalyshev, died heroically that day. Hearing the sirens of the air alarm, he ran to the neighbors, the elderly, to warn them of the danger and help them go to the bomb shelter. He saved them, but died himself. This heroic act of a teenager who gave his life saving his elderly neighbors from Russian missiles in Ukrainian Odessa unfolds another page of the heroic testimony that his Ukrainian people are giving to the world today.
God bless Ukraine! God, give us the strength to witness to You in the modern world! God, may our suffering, even the slander that our enemy pours out on us, give us the opportunity to testify of You, our God and Savior! God bless the heroic people, especially children and teenagers who give their lives out of love for their neighbor!
The blessing of the Lord be upon you, with His grace and love of man, always, now, and forever and ever. Amen.
Christ is Risen! He is Risen Indeed!