Ukraine Archbishop says "The enemy strikes missiles at those places in Ukraine where there is a relatively quiet life..." 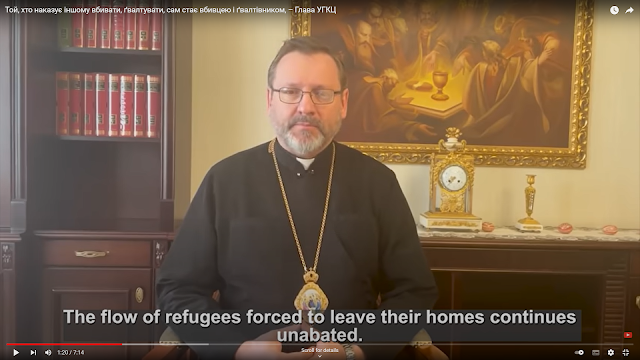 Christ is Risen!
Dear brothers and sisters in Christ!
Today is Saturday, May 21, 2022, and Ukraine is already experiencing the 87th day of this Russian aggression.
The war does not stop… Active hostilities continue along the entire front line, from Kharkiv to the Azov and Black Seas. Strong battles are being fought in Luhansk and Donetsk regions. The enemy strikes missiles at those places in Ukraine where there is a relatively quiet life, in particular the Dnipropetrovsk and Poltava regions, constantly shelling Mykolayiv and Odessa.
But Ukraine stands. Ukraine is struggling. Ukraine wins, in particular, it wins over evil and all those who carry it and those who want to spread it in Ukraine and the world.
The flow of refugees who are forced to leave their homes continues. These internal movements of the population of Ukraine have changed, because today the poorest people are leaving the most dangerous places, who previously had nothing and nowhere to go. They mostly stay in the south and in the center of Ukraine, around our Kyiv, and we are looking for possible ways to serve these people, how to receive them, feed them…
Currently, the struggle is not only at the front. We are fighting for our economy so that the Ukrainian chernozem land can feed its bread not only to our people, but to the whole world. Ukraine not only fights, it works, serves, stands and prays, trusts the lives of everyone in need, our servicemen, the world - in the hands of God.
Today we begin to reflect on the second part of the Catechism, the teachings of our Church, so that we can relive the hardships of war. Let's talk about the so-called sins of others.
Sin is always a misfortune, a wound, the beginning of man's death in this earthly life and a danger to his eternal happiness. We call sin what a person consciously and voluntarily does as a participant in evil and death. Sin is a voluntary violation of God's commandment, a warning.
Around those towns and villages where the enemy visited and from which we expelled him, we see the inscriptions "Careful, mines!". These inscriptions warn us of the danger that threatens our lives. In the same way, when the Church warns us of the danger of sin, she worries about our spiritual life and health, about our eternal happiness.
In today's world, in which the separation of one person from another is emphasized and an extreme individualistic culture prevails, there is only personal responsibility for actions, there is no collective responsibility for any actions. That is why it is quite difficult to talk about other people's sins today, because sin is something purely personal. However, there are acts or omissions of a person, as a result of which he becomes an accomplice in another person's crime. Little is said about such a danger, but it is constantly waiting for us and threatens not only peace on earth, but also our eternal happiness in heaven.
The first in the list of other people's sins is to command to sin, to incite to sin. We see that during the war the enemy gives many criminal orders. He who commands another to kill, to rape, becomes a murderer and a rapist. Anyone who sends an army to kill people in another country becomes personally responsible for the evil he has ordered others to do.
May the Lord God protect us all from evil, from sin, so that we may never be the cause of the wounds and sufferings of others. As Christians, we are called to share the good with our neighbors.
God bless Ukraine! God bless the children of the Ukrainian war! God, save all those who have fallen into the clutches of an unjust aggressor and are in danger of death! Lord, give courage not to carry out criminal orders, whether military or civilian, to any person! God, convert all sinners to a righteous life and repentance and have mercy on all of us!
The blessing of the Lord be upon you, with His grace and love of man, always, now, and forever and ever. Amen.