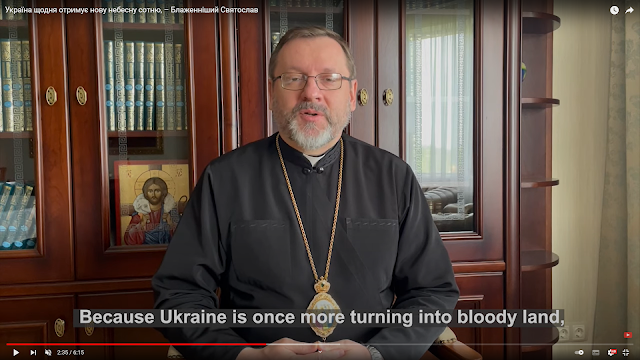 Christ is Risen!
Dear brothers and sisters in Christ!
Today is Monday, May 23, 2022, and Ukraine is already experiencing the 89th day of the deadly war that Russia is waging against the Ukrainian people. Every day this war in Ukraine brings a large number of victims… The enemy uses the tactics of scorched earth, totally destroying our cities and villages and killing civilians.

The Ukrainian east from Kharkiv, Luhansk and Donetsk regions to the north of Zaporizhia region and Kherson region is literally on fire. The enemy mercilessly fires everything he achieves with his weapon. The central regions of Ukraine, in particular the Zhytomyr region, were also subjected to active rocket fire yesterday and tonight.
But Ukraine stands. Ukraine is struggling. Ukraine is successfully defending itself. Ukraine is praying.
Yesterday we heard from the President of Ukraine that, unfortunately, 50 to 100 Ukrainian servicemen die at the front every day, and the number of civilians killed is ten times higher. So, every day Ukraine receives a new heavenly hundred.
Our enemy also suffers enormous losses. Various analytical publications that follow the events in Ukraine claim that in less than three months of the war in Ukraine, the Russians have suffered more losses than the Soviet Union in the nine years of war in Afghanistan. It can't help but hurt us, because Ukraine is turning into bloody lands again. That is why we are praying for an end to this madness. Today, Ukrainians, like no one else, see that war is a terrible crime, and by committing it, a person loses God's image and human dignity.
Today I would like to reflect on another "foreign" sin. It sounds like this: to advise against sin.
We see that crimes, sins are first born in the mind and heart of a person. Before the war enters the battlefield, it arises in the imagination and mind of the people through misanthropic theories, ideologies. Anyone who develops them, who incites modern man to hate another person, who advises to sin - sows death in the souls of those who then become criminals, taking up arms to kill peaceful people.
The first two "foreign" sins, which we reflected on in the previous days, seem to motivate a person to sin from the outside. Instead, counseling for sin corrupts a person's heart, sowing death in his heart. Everyone who advises against sin becomes an accomplice in all the crimes that this diabolical seed of death then brings into the life of the person who commits sin.
That is why today we ask the Lord God that no one in any country should have counselors who would advise against sin, would encourage war.
God bless Ukraine! God bless the Ukrainian army! God, breathe Your Spirit into the hearts of men, so that even when someone advises sin, we reject it as devilish temptations! God, stop this way in which evil, death paves its way in the human heart! God bless all those who work for good! God bless Ukraine!
The blessing of the Lord be upon you, with His grace and love of man, always, now, and forever and ever. Amen.