Ukraine Archbishop says "I ask all intellectuals of the world: do not be silent! Because if we do not condemn now the genocide of the Ukrainian people..." 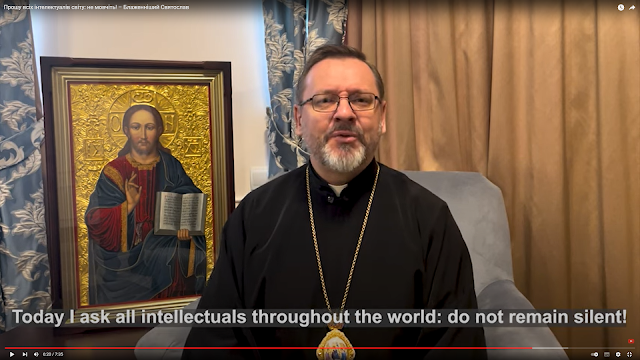 Daily message of the Head of the Greek-Ukrainian Catholic Church in Ukraine.
Christ is Risen!
Dear brothers and sisters in Christ!
Today is Sunday, May 15, 2022, and for the 81st day the Ukrainian people are waging a brutal, bloody struggle against the Russian aggressor, who is killing the sons and daughters of the Ukrainian people and trampling our Ukrainian land.
Heavy fighting has been going on in Luhansk, Donetsk, Kherson and Zaporizhia over the past 24 hours. The enemy tries to advance, but the Ukrainian army heroically defends the Ukrainian land.
According to yesterday's reports, more than 170,000 civilians in Mariupol are suffering from hunger. Our defenders have been heroically defending him every day. The city is completely surrounded. People of good will are shouting to the whole world to save those who today stand in the way of the Russian aggressor's plan, because Ukraine's victory is being forged in Mariupol. Therefore, I appeal to all those who have in their power the salvation of the people of this city of Mary: do your job! We are praying and doing everything we can to save those who are on the verge of starvation and whose heads are being dropped by tons of Russian bombs every day.
Today, especially in the context of this war, Ukraine is the most contaminated territory with explosives. Even in the liberated area, tens of thousands of hectares of Ukrainian land are still waiting to be demined. And this is work for many years to come.
But Ukraine stands. Ukraine is struggling. Ukraine is covering the world with its breasts from the latest danger that awaits all mankind today. And we feel that the Lord God is with us and blesses us. Ukraine is defeating its enemy day by day. Good triumphs over evil.
Today I would like to reflect with you on another work of charity that may be forgotten today: I do not know how to teach.
To teach someone who does not know, to share their knowledge, skills, even the achievements of civilization - is, on the one hand, a work of charity, and on the other - a condition of real progress and development of mankind. The devil, the enemy of the human race, often catches a man because of his ignorance, pretends to be untrue.
The key to true happiness is the ability to distinguish truth from untruth, good from evil. However, in order for this skill to be developed, it must be learned. And today I especially want to thank the teachers and educators who, by eliminating the ignorance of their pupils or students, truly serve them, do a work of charity.
Today I want to thank the volunteers who help refugees from Ukraine to learn the language, laws, customs of the country, the people where they were brought by the war. I thank the teachers, professors, professors - all those who share their skills and knowledge, doing a work of charity for the soul of others.
In particular, I would like to mention the parents who have a responsibility to raise their children and to teach them the Christian faith. Because it is not enough just to give them life, we still need to teach the younger generations to live…
Today I especially want to address intellectuals, people of science, thinkers of the modern world. We see that the war in Ukraine has a clear ideological component. In addition to the cities and villages of Ukraine, the enemy is destroying the souls, not only of Ukrainians, but of people all over the world, seducing them with lies, calling what is happening in Ukraine some negative statements or words associated with evil in the past. Russia's goal in Ukraine is so-called pacification. However, in reality it is a genocide of the Ukrainian people, which was openly declared in certain instructions.
I ask all intellectuals of the world: do not be silent! Because if we do not condemn now the genocide of the Ukrainian people, which Russia is committing on our land, then tomorrow the souls tempted by such a murderous ideology can bring a lot of harm to all mankind.
God bless Ukraine! God, You are our Teacher. You have revealed yourself as the one who came to teach us, to reveal the Truth to us, to give us eternal life. You are the Teacher of life, we are Your disciples. We call You Teacher, we want to imitate You in our lives, bless our disciples!
God bless Ukraine! God, bless our army, bless our people, teachers, volunteers, all those who teach the words of Your Truth today!
The blessing of the Lord be upon you, with His grace and love for man, always, now, and always, and forever and ever. Amen.
Christ is Risen! He is Risen Indeed!