Ukraine Archbishop says "The intensity of these battles is even difficult to compare with any other similar circumstances after World War II." 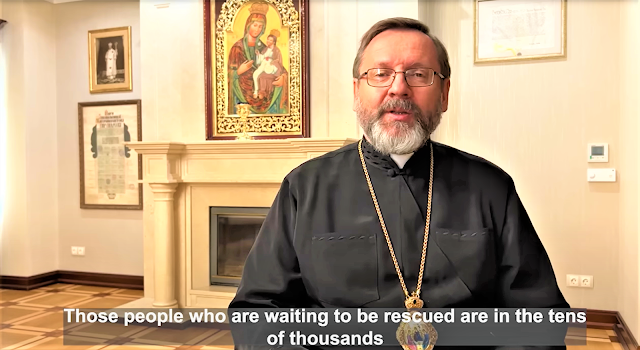 Daily Message of His Beatitude Sviatoslav, Father and Head of the Ukrainian Greek Catholic Church,  May 3, 2022:
Christ is Risen!

Dear brothers and sisters in Christ!

Today is Tuesday, May 3, 2022, and for the 69th day the Ukrainian people are repelling the daily attacks and offensive of the Russian aggressor.

Our people are bleeding, but they are defending the independence of the Motherland. Fierce fighting is going on in the east and south of Ukraine. The intensity of these battles is even difficult to compare with any other similar circumstances after World War II. Great losses are borne by both sides, but the enemy, unfortunately, does not give up attempts to attack Ukraine to seize new Ukrainian lands.

But Ukraine is defending itself and doing so quite successfully. We pray to the Lord God that He will protect Ukraine with His power.

That night a new missile strike was launched on Odesa and Dnipropetrovsk regions. Missile terrorism continues ... We all pray for the evacuation of civilians from Mariupol and thank God for every person saved. However, we feel that this is just the beginning. There are tens of thousands more of those waiting to be rescued ... in the world-famous Azovstal.

But Ukraine stands. Ukraine is struggling and surprising the world.

Today I want to reflect on another gospel bliss that we in Ukraine are experiencing especially deeply these days. Christ says, "Blessed are they which are persecuted for righteousness' sake: for theirs is the kingdom of heaven." This bliss echoes the first bliss of the poverty of the spirit. For it is said, therefore, that he who experiences this bliss is the Kingdom of Heaven.

What is the truth about the bliss that says that the blessed are persecuted for the truth or the truth? Obviously, this is not a personal belief about a certain reality. The Truth that makes us blessed when we are persecuted for it is the Lord Jesus Christ himself, who says of himself, "I am the Truth, the Way, and the Life." It is in His Resurrection that this Truth is given to us, to every human being, as the truth of our life in Christ. For Christians, Truth is not something, but someone. The standard, the meaning of our life for us is the Son of God, who rests in everyone who believes in Him. Christ says, "He that loveth me keeps my commandments, and my Father will love him, and we will come unto him, and make our abode in him." This gospel beatitude says that, according to God's plan, man was created as a temple of the Holy Spirit, as a godly being. We are called to carry the one God in three persons. As the fullness of the Godhead rests in Jesus Christ, so each of us is called to carry that fullness. And we are blessed when we are persecuted not for some of our transgressions, private transgressions or crimes, but for the fact that we are the bearers of the Holy Trinity. For every such persecution reveals what we carry within us, in our being.

That is why today in Ukraine we ask: “Father, Holy Spirit, only begotten Son, rest in us. And we, the people who believe in You, are ready to testify to You even at the cost of the persecution that the enemy is preparing for all of us. "

Those persecuted for the Truth are those who have the courage to proclaim it, do not renounce it before the mighty of this world, are not able to exchange it for any mercantile interests or in search of an ordinary piece of bread.

Today Ukraine is dying for the Truth. Ukraine proclaims the Truth taught to us by our apostles Cyril and Methodius, which we received in the waters of the Baptism of St. Prince Vladimir here in Kyiv, on the Dnieper.

May this Truth be life-giving to us. No one can say that he has already understood and recognized her. Each of us is called to strive for it. It is growth in the Truth that makes us blissful. May this bliss in the post-truth world be the call and task of every person who believes in Christ.

The blessing of the Lord be upon you, with His grace and love of man, always, now, and forever and ever. Amen.

Christ is Risen! He is Risen Indeed!