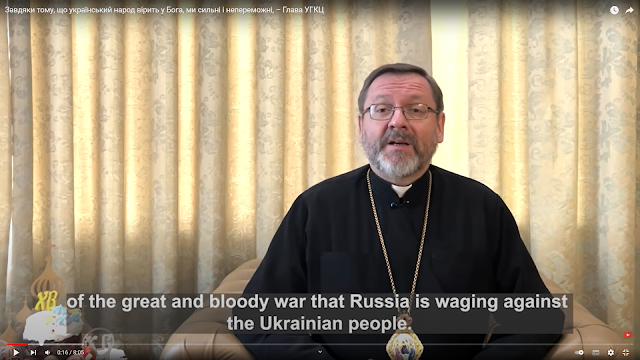 Christ is Risen!
Dear brothers and sisters in Christ!
Today is Monday, May 30, 2022, and Ukraine is already experiencing the 96th day of the great and bloody war that Russia is waging against the Ukrainian people. And we thank the Armed Forces of Ukraine and the Lord God for living last day, last night and we can meet the sun, the light of this Monday morning.
Ukraine is on fire. Heavy fighting is taking place along the entire front line. Heavy fighting continues around Severodonetsk, which is an important administrative and industrial center of Luhansk region. Our military is bravely defending its land, but the Russians have used aircraft, artillery and other deadly weapons that man has just invented. The situation is difficult in other parts of the front, in the Donetsk region, but we are simply impressed by the courage and resilience of our Ukrainian army. The Russians strike at other regions of Ukraine, including Mykolayiv and Odesa.
The territory in the north of the country, on the border with Russia, is under constant shelling. The enemy is shelling the city of Kharkiv and Kharkiv region, Sumy region and Chernihiv region.
However, with each passing day, Ukrainians are growing confident that we are defeating our enemy with our resilience. We know that there are different kinds of victory. To endure, to endure - this is also one of the types of victory, in particular in the spiritual struggle.
In recent days, we have been pondering this kind of human infirmity called "other people's sins." The teachers of the Church teach us that in order to overcome evil, it is not enough to overcome one's own sins and one's own weakness. We need to develop virtues that are the opposite of our vices and sins.
Virtues are traits, qualities of man, which reveal in him the likeness of the image of God. In fact, virtues make a person a person, and a Christian - a real, active, living Christian.
Today, I would like to reflect on the basic virtue with which the Christian life begins, which is called faith. What does it mean to believe in God, to be a believer? When we speak of faith as a virtue, we are not talking about a set of knowledge or written truths of Christian doctrine. Nor is it about belonging to a denomination or religious church community. Instead, it is a question of a certain human ability.
The virtue of faith is a gift of God. It reveals the being, mind, will and feelings of man to God, who gives himself to her. Through faith, man accepts God, who enters his life. The virtue of faith is like an open door, through which a person opens to the Lord God present before him or next to him, and it is He who enters her heart. Christ says, "He who loves me will be loved by my Father, and we will come to him and make our home in him." When a person opens up in faith in God, he becomes a new creature. Faith leads to Baptism, which gives us the opportunity to receive the gift of eternal life in our personal lives. Therefore, a person who believes becomes enlightened. Her mind becomes able to know the secrets of the invisible, hitherto unknown God. Her will becomes able to choose good. Her senses become able to feel God's presence.
Faith opens our spiritual senses. We begin to live in a new way, in the light, as our Savior says. We become children of the light that He is. Christ said of himself, “I am the light of the world. He who follows me will not be lost in darkness, but has the light of life. " Man's faith enables God to act through him, to work miracles. That is why Christ says, "Nothing is impossible for him who believes."
Faith must be shared. In a few days, on the feast of the Ascension of the Lord, we will begin the Decade of Mission in our Church. We will consider how this gift of faith, of eternal life, which we carry within us through the Sacrament of Baptism, can be passed on to others. Due to the fact that the Ukrainian people believe in God, we are strong and invincible. Because we are strong in God's power, we have the ability to defeat the enemy and stand our ground.
God, strengthen our faith! We pray the words that the apostles once addressed to our Lord Jesus Christ himself. God bless your believing people! God bless the children of Ukraine! God, grant us through faith in You - faith in the greatness of the man you created in your image and likeness! God, give us faith in the victory of Ukraine!
The blessing of the Lord be upon you, with His grace and love for mankind, always, now, and forever and ever. Amen.