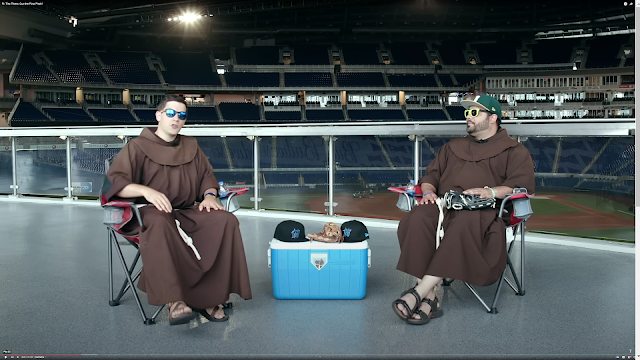 In summer 2022, two friars set out on a pilgrimage like no other. In just 11 weeks, we plan to visit all 30 Major League Baseball stadiums, meeting people where they are, to invite them to return home.

Home to Jesus and his Church.

St. Francis of Assisi didn’t just preach in churches, the places where people who already had faith gathered. He spent most of his time preaching in the city square, among ordinary people, talking in ways they could understand. He had a gift of finding God even in the ordinary. For 800 years, the Franciscans have continued this legacy.

In 2013, two Franciscan friars, Fr. Casey Cole, OFM (left) and Fr. Roberto “Tito” Serrano, OFM (right) began to dream how they might do this in the modern world. People didn’t gather in the streets like they did in the 13th century, but they gathered in big stadiums. As avid baseball fans, they came up with the idea of spending a summer visiting the homes of America’s pastime, inviting people “home” to the Church.

Nine years later, this dream is hitting the road.

They are using a rented van to drive across the USA. The Bleacher Brothers will also be speaking at parishes, schools, and dioceses.

View a map of the Bleacher Brothers’ tour, Mass schedule and events is available on their website.