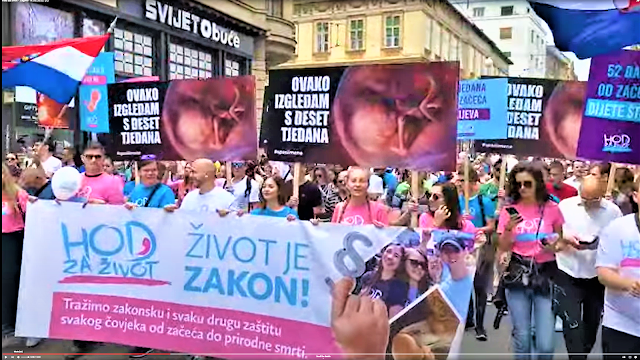 Thousands attended the pro-life March  in Zagreb, Croatia (See Video Below)
In Croatia thousands of people took part in an pro-life march in the Croatian capital of Zagreb on Saturday, May 14, 2022. In Croatia, there is a controversy as pro-abortion groups in Croatia want to force doctors to perform abortions against their conscience.  ‘March for Life’, signs had slogans such as “Unborn children, Croatia’s most endangered minority” and “Unborn lives count too”. In Croatia, many youth and religious supported the March for Life. Abortion is allowed up to the tenth week of pregnancy. After that period, an abortion can be performed if the health of the woman or foetus is in grave danger, or in the case of rape or incest. Nearly 90 per cent of Croatia’s 3.9 million people are Catholic, and the Church remains influential in society. Many doctors, refuse to perform abortions on the grounds of conscientious objection.

Luka Holjevac, an economist and entrepreneur, thanked all doctors, nurses and pharmacists who  use conscientious objection to protect both patients they are required to care for - both the mother and the unborn child.

"A conscientious objection  or  conscientious objection is   an individual's decision to refuse to perform an obligation imposed on him by the legal system. The right to appeal to conscience derives from  freedom of conscience , which is guaranteed by Article 18  of the Universal Declaration of Human Rights  and the Constitution of the Republic of Croatia , "Holjevac emphasized.