Press Release CEM: There have been 7 priests killed so far in the last six-years.

The Attorney General of the State of Chihuahua confirmed that this Monday, June 20 at 6:00 p.m., a report was received indicating that 3 people were murdered in the town of Cerocahui, municipality of Urique.

The events occurred when a man pursued by an armed individual took refuge in a church to protect himself from an attack, however, the perpetrator attacked him inside, as well as the priests Javier Campos, SJ, and Joaquín Mora, SJ who They were in the church. There is talk of a third victim, but his identity has not yet been released.

According to sources close to this medium, the bodies of the victims have been retained by their perpetrators.

In this regard, the Provincial of the Jesuits in Mexico condemned the events through a message.

With deep pain and indignation, I inform you that today, June 20, in the afternoon, in Cerocahui, Tarahumara, Fathers Javier Campos, SJ, and Joaquín Mora, SJ, were assassinated in the context of the violence that this country is experiencing. of trying to defend a man who sought refuge in the church and was being chased by an armed person. 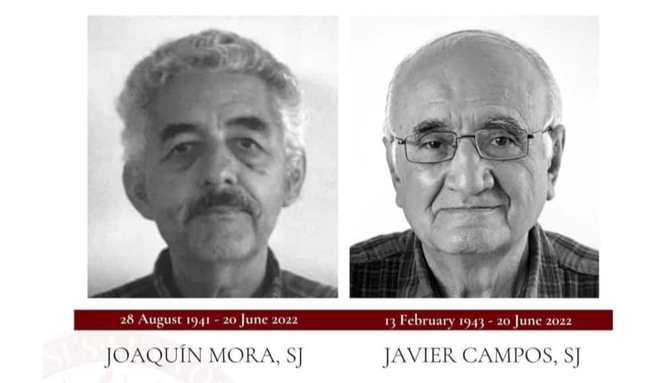 Tomorrow we will publicly condemn this tragedy and demand a prompt investigation and safety for the community."

I ask you to join in praying for them.

Provincial of the Jesuits of Mexico

United in prayer with the entire Society of Jesus!!!

These murders are added to the large number of murders that have been going on in recent months in Mexico.

With the murder of the two murders of the Jesuit priests, there are already 7 priests murdered in our country so far this six-year term, which continues to place Mexico as one of the most dangerous countries to exercise the priestly exercise.

Both the Society of Jesus in Mexico and the Conference of the Mexican Episcopate have transmitted to public opinion statements condemning and demanding justice for the murder of Fathers Javier Campos, SJ, and Joaquín Mora, SJ.

These are the names of the priests killed so far in the last six-years:

-Father Gumersindo Cortés González of the clergy of the diocese of Celaya. On March 28, 2021, the Guanajuato State Prosecutor's Office reported the discovery of the lifeless body that showed signs of violence.  The priest had been missing since the morning of Saturday, March 27.

– Fray Juan Antonio Orozco Alvarado, OFM, fell victim to crossfire  on June 12, 2021. According to data provided by officials of the Franciscan province to which he belonged, the religious and parish priest, along with other lay people who accompanying him, got caught up in a standoff between rival cartels. He was on his way to celebrate mass in the Tepehuana community of Pajaritos and in Mezquital, Durango. The events occurred on the highway on the border of the states of Durango and Zacatecas.

Father José Guadalupe Rivas , who had been missing since the afternoon of Sunday, May 15, 2022, was located on a ranch near Hacienda Santa Verónica in Tecate. He was president of the Casa del Migrante located in the El Resto neighborhood in Tecate, which he had joined in 2021.