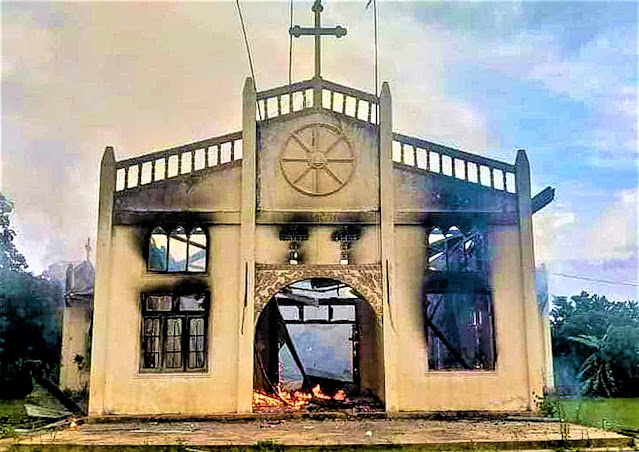 The Catholic church of St. Matthew in Dognekhu (Kayah State), Myanmar, was destroyed by fire. The parish priest and faithful have been living in the jungle for months. The military of the junta continued to set fires, destroying entire villages and forcing thousands of people to flee. The Catholic church of St. Matthew was also burned by the Burmese military junta. It is a parish church of Dognekhu, Phruso Municipality, Kayah State. This was made known to SIR by Father Francisco Soe Naing, chancellor of the diocese of Loikaw. "The junta terrorists only know how to destroy people's properties and burn down houses and villages," he says. “We don't know if there are any injuries. I think no one is left in the village. Everyone must flee the attack of the junta: otherwise they are brutally killed. We know that the parishioners and the parish priest of that parish have been living in the jungle for months because it is not safe to live in the village ”.
The territory of Dognekhu parish includes 6 villages. In the parish there are 473 Catholic houses where 512 Catholic families live. About 2,560 Catholic faithful reside there. Two priests, 6 catechists and 10 "permanent assistants" are serving the people of God in the parish.
The Catholic bishops of Myanmar had published a statement in English at the end of their general assembly to express concern about the situation of fragility in which thousands of civilians live due to political instability and conflict. "Human dignity and the right to life can never be violated," wrote the prelates. “We strongly ask for respect for life and for the sacredness of places of worship, hospitals and schools”. According to NGO data, since the beginning of the coup on 1 February 2021, more than 1,929 civilians have been killed and 11,000 arrested and according to UNCHR, more than 800,000 are internally displaced.
Dozens of churches, including Catholic churches in the states of Kayah and Chin, have been destroyed by airstrikes and artillery bombardments as thousands of people, including Christians, are displaced or fleeing to neighboring India. At least 450 houses - according to reports from the Catholic news agency UcaNews - have been set on fire by junta troops in the historic Catholic villages of Chan Thar and Chaung Yoe in the Sagaing region over the last month or so. The Bishops' Conference denounces the state of anxiety and lack of security in which people find themselves, "in particular the elderly, the disabled, children, women and the sick". The bishops also express their gratitude "to the priests, deacons, religious..."
Source: SIR - Image Facebook