#BreakingNews Order of St. Mother Teresa is Expelled from Nicaragua Along with 100 Other NGOs by Ortega 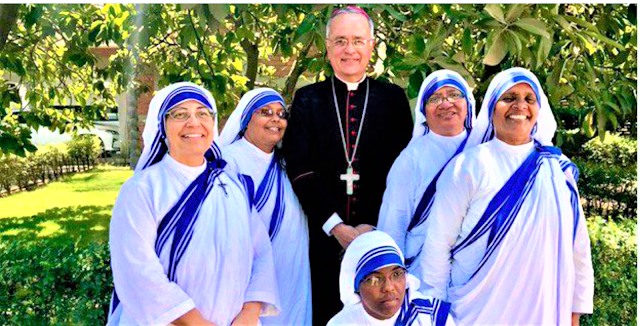 According to EFE and Confidencial, the government in Nicaragua has expelled from the Missionaries of Charity, founded by Mother Teresa of Calcutta.
The charity was included in a list of 101 associations and foundations, which this week will be outlawed by the Ortega Parliament

June 28, 2022
The Missionaries of Charity Association, founded in Nicaragua by Mother Teresa of Calcutta and to which the Government of Daniel Ortega and Rosario Murillo ordered its dissolution, has closed its charities and its nuns are preparing to leave the country, sources from that congregation to the EFE agency. In addition, the auxiliary bishop of the Archdiocese of Managua, Monsignor Silvio Báez, confirmed it through his Twitter account.

The Nicaraguan authorities notified the nuns of foreign origin, who are the ones who manage the charity centers, that they must leave Nicaragua and they are preparing their belongings to make the trip, said a nun, who asked not to be identified.

“It makes me very sad that the dictatorship has forced the Missionaries of Charity Sisters of Teresa of Calcutta to leave the country. Nothing justifies depriving the poor of charity care. I am a witness to the loving service that the sisters provided. God bless you”, lamented Monsignor Báez.

Parliament, dominated by the Sandinista Front, plans to debate this week the cancellation of the legal status of 101 NGOs, including the Missionaries of Charity Association, which maintains a nursery, a home for abused or abandoned girls. , and a nursing home, which began to close on June 15.
The parliamentary directive decided not to present the issue before the plenary session on Tuesday, despite the fact that it was on the agenda.
Without permission to care for girls or the elderly
According to a report from the General Directorate of Registration and Control of Non-Profit Organisms of the Ministry of the Interior, the Missionaries of Charity "have failed to comply with their obligations" in accordance with the law that regulates them, and the Money Laundering Law, the Financing of Terrorism and Financing of the Proliferation of Weapons of Mass Destruction.
Among others, the Ministry of the Interior maintained that the Missionaries of Charity are not accredited by the Ministry of Family to function as a nursery, child development center or girls' home or nursing home, nor do they have permission from the Ministry of Education to carry out the learning reinforcement.
In addition, they did not report fixed assets, and the activities of their headquarters in the city of Granada, located in the southwest of the country, were not reported: girls' home, dining room, nursery and learning reinforcement.
The balances of income from donations do not coincide with those reported in the reports presented, and they do not present formal accounting of their assets with generally accepted accounting systems, according to official information.

“It is ordering”: This is how the Ortega regime radicalizes its crusade against NGOs
Another reason to dissolve that NGO, alleged the Government, is that the board of directors is made up only of citizens of other nationalities, and the new law that regulates them -Law 1115-, in force for two months, establishes that only 25% of the people who make up the board may be foreigners.
It was created in 1988 after a visit from Mother Teresa
The Missionaries of Charity Association was created on August 16, 1988 during the first Sandinista regime (1979-1990), and its opening took place after a visit to Nicaragua by Mother Teresa of Calcutta, in which she met with Daniel Ortega, who was also the president at the time.
The nuns of the Mother Teresa of Calcutta Order administered the Immaculate Heart of Mary Home in the city of Granada, where they shelter abandoned adolescents or victims of abuse, to whom they provide psychological help and comprehensive education.
Along with regular classes, they taught music, theater, sewing, beauty and other trades so that they can reintegrate into life.
They also attended a nursing home in Managua, to whom they provided food, clothing and other care.
They also developed a project in which they provided tutoring to students at risk, mostly children of working women from popular markets.
They also had a nursery in which they cared for dozens of children from low-income families, whose parents -mainly single mothers and vendors in markets, street vendors, or on their own-, do not have to pay for the care of their children.
Nicaragua loses more than 25 million dollars by canceling 53 international NGOs
Those charities have been gradually suspended since June 15, the source said.
With this new onslaught of outlawing associations and civil organizations, the regime will accumulate 770 NGOs canceled from November 29, 2018 to the end of June. So far in 2022 there will be 696 organizations without legal status.
Source: Confidencial and EFE