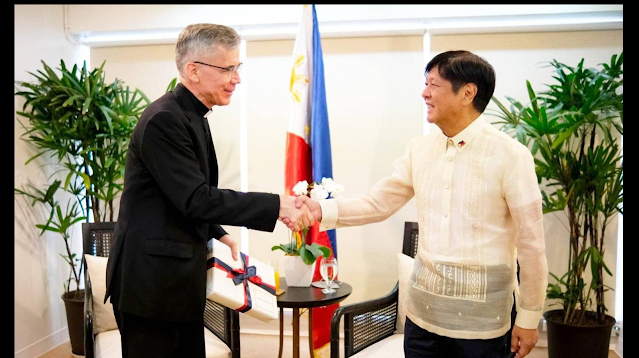 CBCPNews reports that President-elect Marcos assures collaboration with Church.
Archbishop Charles Brown, papal nuncio to the Philippines, meets with president-elect Ferdinand Marcos Jr. on June 10, 2022. By CBCP News Release from June 13, 2022, Manila, Philippines.
President-elect Ferdinand Marcos Jr. said his administration would effectively collaborate with the Catholic Church, the envoy of the Holy See said.
Archbishop Charles Brown was among the ambassadors who paid a courtesy call on Marcos on June 10.
The archbishop, who is also the Dean of the Diplomatic Corps, described their meeting as “very productive and encouraging”.
“The president-elect assured me of his desire to collaborate, cooperate closely with the church and Holy See,” Brown told Radio Veritas on Monday.
Marcos will take oath as the country’s 17th president at the National Museum on June 30.
Church officials have earlier assured they will work with the incoming administration for the common good.
“We will, as always, exercise principled cooperation with the government,” the Caritas Philippines said.
Source: CBCP News - Image Screenshot from the FB Page of the CBCP