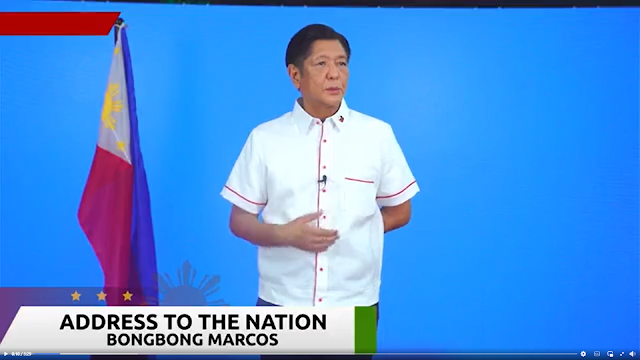 Pope Francis congratulated, and offered prayers for Marcos Jr. the new president of the Philippines.
Ferdinand Marcos Jr is sworn in as the 17th president of the Philippines by Supreme Court Chief Justice Alexander Gesmundo on June 30, 2022, at the National Museum in Manila.
June 30, 2022
Manila, Philippines
Pope Francis congratulated Ferdinand Marcos Jr on his inauguration as president of the Philippines.
In a message sent to the new head of state, he assured him of his “best wishes” as Marcos begins his presidential mandate.
“In assuring you of my prayers that you will be sustained in wisdom and strength, I invoke Almighty God’s blessings of peace and prosperity upon the nation,” the pope wrote.
The message was also read by Archbishop Charles Brown, Holy See’s ambassador to the Philippines, during the Pope’s Day Mass at the Manila Cathedral on June 29.
Marcos assumed office Thursday, June 30, in a ceremony in Manila, succeeding Rodrigo Duterte.
The 64-year-old leader won a landslide vote last month.
Archbishop Brown earlier assured Marcos of the Church’s collaboration “as he takes on the weighty responsibility of his office”.
There are currently 183 states including the Philippines that have diplomatic relations with the Holy See.
The Vatican also maintains more than 115 nunciatures throughout the world, one of them is in Manila.
Source: Press Release CBCP News