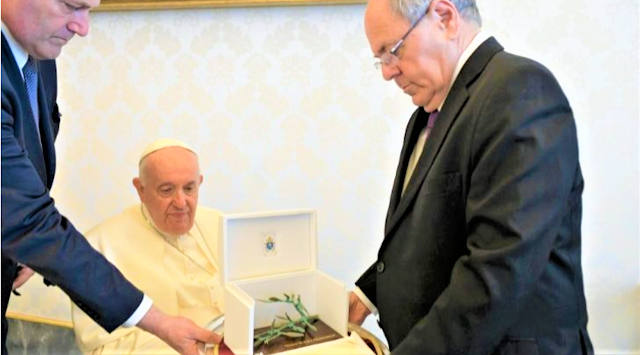 Yad Vashem is the World Holocaust Remembrance Center in Jerusalem, and is universally recognized as the ultimate source for Holocaust education, documentation and research.
Pope Francis visited Yad Vashem in 2014 during his pilgrimage to the Holy Land. During his speech there, he implored the Lord to “grant us the grace to be ashamed of what men have done,” and cried out “Never again, Lord, never again!”
He is the first Yad Vashem chairman to be received in a private audience with the Pope,  and Dayan revealed that he was also born in Buenos Aires.
Vatican Archives
Dayan said he thanked the Pope for having opened the Vatican Archives on Pope Pius XII.

In March 2020, the Vatican Apostolic Archives, alongside several other archives of the Holy See on the pontificate of Pius XII (1939-1958) were opened to consultation by scholars.
“When I thanked him for opening the archives of the Vatican of the relevant period of the Holocaust for our researchers, he said very clearly that to open the archives is to make justice,” Dayan said.
The Pope, he said, reiterated “that the Church not only is not afraid of history, the Church loves history.”
The Holy Father went on to say that he is well aware that, as in other organizations, in the Church “there were people who did the right thing, and those who did not.”
Dayan said Pope Francis was very clear in condemning the scourge of anti-Semitism.
“For Yad Vashem, which is dedicated to the memory of the 6 million Jews that were assassinated by Nazi Germany and by its collaborators, this is a historical moment.”

Dayan said he presented the Pope with a gift, and he was gracious enough to present one, too, saying: “Never forget you have a friend here.”
Edited from Vatican News