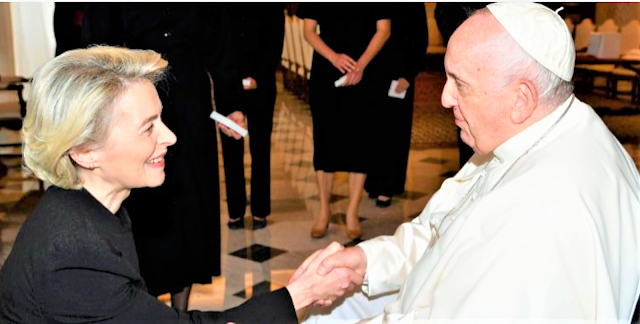 Holy See Press Office Release: This morning, the Holy Father Francis received in audience, in the Vatican Apostolic Palace, the President of the European Commission, Her Excellency Ms. Ursula von der Leyen, who subsequently met with His Eminence Cardinal Secretary of State Pietro Parolin, accompanied by His Excellency Archbishop Paul Richard Gallagher, Secretary for Relations with States and International Organizations.
During the cordial discussions held in the Secretariat of State, the parties focused on the good bilateral relations and common commitment to work to bring the war in Ukraine to an end, dedicating particular attention to the humanitarian aspects and the food consequences of the continuation of the conflict. Attention then turned to the conclusions of the Conference on the future of Europe and on the consequences for the future structure of the Union. From the Vatican, 10 June 2022 https://press.vatican.va/content/salastampa/it/bollettino/pubblico/2022/06/10/0449/00925.html
On Twitter she wrote:

We stand with those suffering from the destruction in Ukraine.

This war must end, bringing peace back to Europe. pic.twitter.com/GimPCa4gUl