Saint June 17 : St. Albert Chmielowski, a Painter, and the Founder of the 3rd Order of St. Francis, Servants of the Poor 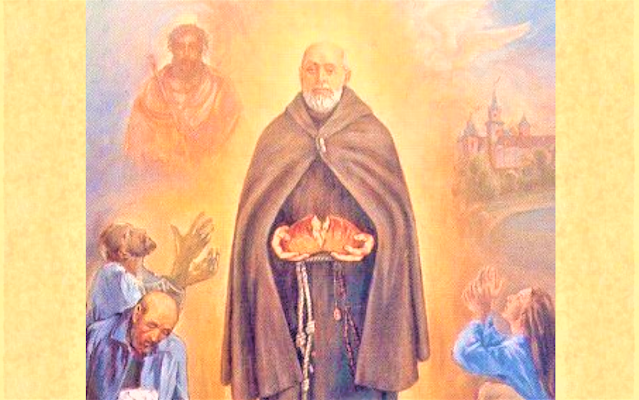 Albert Adam Chmielowski of Krakow (1845-1916)
founder of the Brothers and Sisters of the Third Order of St. Francis, Servants of the Poor

Brother Albert, born Adam Chmielowski, was born in Igolomia, near Krakow (Poland), on August 20, 1845, the first of four children, to Adalbert and Józefa Borzystawska, descendants of a noble family. Adam spent his childhood in Warsaw. From his earliest years he was very charitable to the poor and shared with them what he had.

Sent to Petersburg, to the cadet school, after a year his mother sent him back to the family, worried about the influence that Russian education had on her son, and sent him to attend the Warsaw gymnasium. Left orphan of his parents, he was placed in the care of his paternal aunt Petronela.

In 1863, an insurrection against Tsarist oppression broke out in Poland. Adam, then a student of the Agricultural Institute in Pulawy, enthusiastically joined it and, during a fight, on September 30, 1863, near Melchów, was seriously injured; taken prisoner, his left leg was amputated without anesthesia, demonstrating exceptional courage.

Thanks to the interest of his relatives, he escaped from captivity and was forced to leave his homeland. He was in Paris to study painting; he then moved to Ghent (Belgium) where he attended the faculty of engineering, then resumed his painting studies at the Academy of Fine Arts in Munich.

In every environment his Christian personality emerged which, translated into coherence of life and professional commitment, influenced those who frequented him.

In 1874, Chmielowski returned to his homeland. In search of a new ideal of life, he asked himself the question: "By serving art, can one also serve God?". his artistic production, which included mostly profane subjects, was then continued with sacred subjects. One of his best religious paintings, the "Ecce Homo", was the result of a profound experience of Christ's merciful love for man and led Chmielowski to a spiritual metamorphosis.

Convinced that to serve God "one must dedicate art and talent to him", in 1880 he entered the Society of Jesus as a lay brother. After six months he had to leave the novitiate due to poor health.

Having overcome a profound spiritual crisis, a new life began, dedicated entirely to God and to the brothers. Living with relatives in Podolia (part of Poland subject to Russia), he met the III Order of St. Francis, began to visit the parishes in the area, restoring paintings and spreading the tertiary spirit among the rural people. Forced to leave Podolia, he went to Krakow, where he settled with the Capuchin Fathers. There he continued his activity as a painter and at the same time dedicated himself to assisting the poor, allocating the proceeds of his paintings to them.

By chance he became aware of the tragic situation of the poor, crowded into the so-called heating places or public dormitories of Krakow and decided to come to their aid.

Out of love for God and neighbor, Chmielowski renounced the success of art, material well-being, aristocratic circles and decided to live among those poor, to relieve them of their moral and material miseries. In their trampled dignity he discovered the outraged Face of Christ and wanted to renew it in them.

On 25 August 1887 he wore a gray habit, took the name of Brother Alberto and a year later, with the consent of Cardinal Dunajewski, he took his vows as a Franciscan tertiary, starting the Congregation of Friars of the III Order of St. Francis, Servants of the Poveri (1888), who took care of the male dormitory. Later Brother Alberto took on the assistance of the women of the public female dormitory; her collaborators also gave rise to the female branch of the Congregation (1891), which she entrusted to the Servant of God Sister Bernardyna Jabkonska.

Together with his Congregations he dedicated himself, with full availability, to the service of the poorest, the dispossessed, the abandoned, the marginalized and the vagabonds. For them he organized the shelters as houses of material and moral assistance, which offered voluntary work, of an artisanal nature, together with the friars and nuns in the same dwelling, allowing them to earn for their own livelihood.

Despite his disability and a rudimentary leg prosthesis, he traveled extensively to found new kindergartens in other cities in Poland and to visit religious houses. These houses were open to all, regardless of nationality or religion. In addition to kindergartens, he also founded nurseries and orphanages for children and young people, homes for the elderly and incurable and kitchens for the people. He sent the nuns to work in military hospitals and lazarets during the First World War.

In the course of his life, a total of 21 religious houses arose, in which 40 friars and 120 nuns worked.

With the example of his life he taught that "one must be as good as bread ... which everyone can take to satisfy their hunger". He observed himself and recommended to his religious the maximum evangelical poverty following the example of St. Francis of Assisi. he entrusted his charitable work with total trust to divine Providence. The strength to carry out his activity was drawn from prayer, from the Eucharist and from love for the Mystery of the Cross.

Suffering from stomach cancer, he died in Krakow on Christmas Day 1916, in a shelter for the poor. Before dying, pointing to the image of Our Lady of Czestochowa, she said to the brothers and sisters: "This Madonna is your Foundress, remember this". And again: "First of all, observe poverty".

In those who had approached and known him, he left a wonderful testimony of faith and charity.

In Krakow and throughout Poland, he is known as the Father of the poor and, due to his evangelical poverty, he is called the "Polish St. Francis of the twentieth century".
Brother Alberto left a trace in the history of the Church; incisive. He not only correctly interpreted the Var frost on the mercy of Christ and accepted it, but above all he introduced it into his own religious life.

Today the Albertini Brothers and the Albertine Sisters realize the charism of the Founder by offering their service in Poland. The sisters are also widespread in Italy, USA and Latin America.

On June 22, 1983, Pope John Paul II beatified Friar Albert in Krakow, during his second apostolic visit: to Poland. By proclaiming him a saint on November 12, 1989 in Rome, the Church points to him as a model for our times of witnessing love for God, which is manifested in Christian love for neighbor, in the spirit of evangelical goodness.