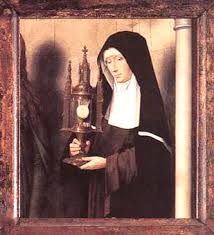 St. Elizabeth of Schoenau
BENEDICTINE ABBESS AND MYSTIC
Feast Day:
June 18
Born:
1129 at Germany
Died:
18 June 1165 at Bonn, Germany
Patron of:
against temptations
Prayer: O God, who called your handmaid blessed Elizabeth to seek you before all else, grant that, serving you, through her example and intercession, with a pure and humble heart, we may come at last to your eternal glory. Through our Lord Jesus Christ, your Son, who lives and reigns with you in the unity of the Holy Spirit, one God, for ever and ever. Amen.Born about 1129; died 18 June, 1165.-Feast 18 June. She was born of an obscure family, entered the double monastery of Schönau in Nassau at the age of twelve, received the Benedictine habit, made her profession in 1147, and in 1157 was superioress of the nuns under the Abbot Hildelin. After her death she was buried in the abbey church of St. Florin. When her writings were published the name of saint was added. She was never formally canonized, but in 1584 her name was entered in the Roman Martyrology and has remained there.
Given to works of piety from her youth, much afflicted with bodily and mental suffering, a zealous observer of the Rule of St. Benedict and of the regulation of her convent, and devoted to practices of mortification, Elizabeth was favoured, from 1152, with ecstasies and visions of various kinds. These generally occurred on Sundays and Holy Days at Mass or Divine Office or after hearing or reading the lives of saints. Christ, His Blessed Mother, an angel, or the special saint of the day would appear to her and instruct her; or she would see quite realistic representations of the Passion, Resurrection, and Ascension, or other scenes of the Old and New Testaments. What she saw and heard she put down on wax tablets. Her abbot, Hildelin, told her to relate these things to her brother Egbert (Eckebert), then priest at the church of Bonn. At first she hesitated fearing lest she be deceived or be looked upon as a deceiver; but she obeyed. Egbert (who became a monk of Schönau in 1155 and succeeded Hildelin as second abbot) put everything in writing, later arranged the material at leisure, and then published all under his sister's name.Thus came into existence* three books of "Visions". Of these the first is written in language very simple and in unaffected style, so that it may easily pass as the work of Elizabeth. The other two are more elaborate and replete with theological terminology, so that they show more of the work of Egbert than of Elizabeth.* "Liber viarum Dei". This seems to be an imitation of the "Scivias" (scire vias Domini) of St. Hildegarde of Bingen, her friend and correspondent. It contains admonitions to all classes of society, to the clergy and laity, to the married and unmarried. Here the influence of Egbert is very plain. She utters prophetic threats of judgment against priests who are unfaithful shepherds of the flock of Christ, against the avarice and worldliness of the monks who only wear the garb of poverty and self-denial, against the vices of the laity, and against bishops and superiors delinquent in their duty; she urges all to combat earnestly the heresy of the Cathari; she declares Victor IV, the antipope supported by Frederick against Alexander III, as the one chosen of God. All of this appears in Egbert's own writings.* The revelation on the martyrdom of St. Ursula and her companions. This is full of fantastic exaggerations and anachronisms, but has become the foundation of the subsequent Ursula legends.There is a great diversity of opinion in regard to her revelations. The Church has never passed sentence upon them nor even examined them. Elizabeth herself was convinced of their supernatural character, as she states in a letter to Hildegarde; her brother held the same opinion; Trithemius considers them genuine; Eusebius Amort (De revelationibus visionibus et apparitionibus privatis regulae tutae, etc., Augsburg, 1744) holds them to be nothing more than what Elizabeth's own imagination could produce, or illusions of the devil, since in some things they disagree with history and with other revelations (Acta SS., Oct, IX, 81). A complete edition of her writings was made by F.W.E. Roth (Brunn, 1884); translations appeared in Italian (Venice, 1859), French (Tournai, 1864), and in Icelandic (1226-1254).(Taken from Catholic Encyclopedia)