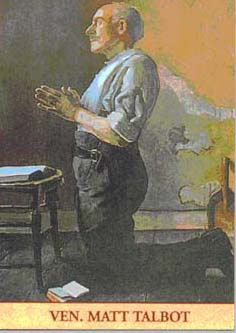 (See prayer at Bottom) Biography: Matt Talbot was born on the 2nd May 1856 at 13, Aldborough Court in the Parish of St. Agatha, Dublin, Ireland. Matt was one of Dublin's poor he lived in a tenement, wore second hand cloths, died in a laneway and was buried in a pauper's grave. Coming from such a deprived background and with an alcoholic father and a family history of neglect and poverty, Matt found himself sucked into the culture of addiction and to the only choice of drug available to the poor of his day alcohol. Matt like so many others embraced alcohol as a means of escape from the misery and poverty of daily life.

Today we live in an age of addictions more sophisticated perhaps than those of Matt's day, addictions to substances such as alcohol and other drugs soft or hard, prescription or illegal, addictions to gambling, pornography and the internet, addictions to work, professional advancement, sex, money and power. All these have the ability to destroy our lives and like demons even our very souls as well.
Matt Talbot gradually came to this awareness and from the time of his conversion as a young man of 28, he spent the rest of his life living to a heroic extent the Christian virtues through prayer, spiritual reading, work and acts of charity. For three months, Talbot decided to make a general confession and begin to attend daily Mass. The first seven years after taking the starting were especially difficult. He avoided his former drinking places. He began to pray. He paid back people from whom he had borrowed or stolen money.  He joined the Secular Franciscan Order with strict penance; he abstained from meat nine months a year. Matt read Scripture and the lives of the saints every day. He prayed the rosary daily.  Matt sets before us a radical example which demonstrates that ordinary people can do extraordinary things. His life is a witness to the fact that people can by God's grace and their own self acceptance say no to that which leads to addiction or addictive behaviors.
Trinity Sunday the 7th June was the hottest day of a heat wave that had gripped the country since the previous week. Matt as usual had attended the 5.30am Mass in Gardiner St. and went to Holy Communion with the men of his Sodality at 8.00am Mass after Mass he returned to Rutland Street to have his usual meagre breakfast, one of his neighbours thought he looked poorly and advised him to take a little rest. Matt admitted that he was feeling a little weak but a half an hour later Matt came down again; he smiled at his neighbour, said he felt all right and was going on to the 10am Mass in Dominick Street. Dominican Church He always hurried to Mass. Around two sides of Mountjoy Square, along Gardiner Place, past Belvedere College, down Gardiner Row and along the North side of Parnell Square he was now just a few minutes away from his goal, the Dominican Church. Turning into Granby Lane, a short cut to the Church, he stumbled and collapsed. Passers by came to his aid people coming from an earlier Mass in Dominick called for a priest, a nurse and a Guard were on the scene. An eye witness account from Noel Carroll, who was a young boy at the time, recalls how his father who was manager of a chemist's shop at Bolton Street, would generally attend the 10am Mass on Sunday mornings in Dominick Street.
Prayer to Venerable Matt Talbot
Asking Matt's Help in the Presence of the Lord Gentle Matt, I turn to you in my present needs and ask for the help of your prayers. Trusting in you, I am confident your charitable and understanding heart will make my petitions your own. I believe that you are truly powerful in the presence of Divine Mercy. If it be for the glory of the Sacred Heart of Jesus, the honour of Mary, our Mother and Queen and the deepening of my relationship with them, show that your goodness towards me, in my daily struggles, equals your influence with the Holy Spirit, who is hidden and at home in my Heart. Friend of pity, friend of power, hear, oh hear me in this hour, gentle Matt, please pray for me.