Saint June 2 : St. Marcellinus a Priest and St. Peter an Exorcist both Martyrs who Died in 304 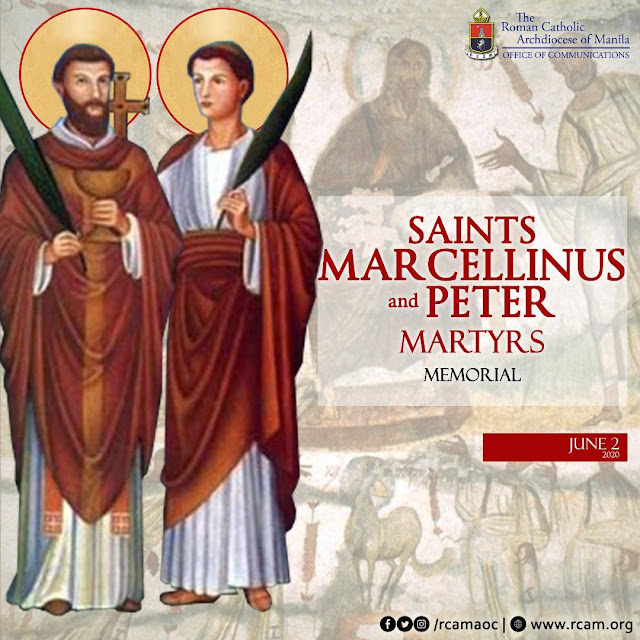 PRAYER O God, who surround us with protection through the glorious confession of the Martyrs Saints Marcellinus and Peter, grant that we may profit by imitating them and be upheld by their prayer. Through our Lord Jesus Christ, your Son, who lives and reigns with you in the unity of the Holy Spirit, one God, for ever and ever. Amen.
Marcellinus was a priest, and Peter an exorcist, both of the clergy of Rome, and eminent for their zeal and piety. In the persecution of Dioclesian, about  the year 304, they were condemned to die for their faith: and by a secret order of the judge, the executioner led them into a forest, that the holy men being executed privately, no Christians might be acquainted with the place of their sepulchre. When he had brought them into a thicket overgrown with thorns and briers, three; miles from Rome, he declared to them his sanguinary commission. The saints cheerfully fell to work themselves, grubbed up the brambles, and cleared a spot fit for their sepulchre. After they were beheaded, their bodies were buried in the same place. Some time after, Lucilla, a pious lady, being informed by revelation, and assisted by another devout lady named Firmina, took up their bodies and honorably interred them near that of St. Tiburtius on the Lavican road in the Catacombs.

Pope Damasus assures us, that, when a child, he learned all these particulars from the mouth of the executioner himself, and he has inserted them in a Latin epitaph with which he adorned their tomb. Anastasius the librarian testifies from ancient registers, that Constantine the Great built here a church in honor of these martyrs, in which he caused his mother St. Helena to be buried under a porphyry tomb, on the Lavican road, three miles from Rome, and that he gave to this church a paten, weighing thirty-five pounds, of pure gold, with many other rich presents; which is also mentioned by Bede, Ado, and Sigebert. The porphyry mausoleum of St. Helena is still shown among other antiquities near the Lateran basilica. Honorius I. and Adrian I. repaired this church and cemetery of St. Tiburtius, and SS. Marcellinus and Peter, as Anastasius mentions. Not long after, the bodies of SS. Marcellinus and Peter were translated into Germany on the following occasion. Eginhard, a German, the favorite secretary of Charlemagne, and his wife Emma, by mutual consent, made a vow of perpetual continency; and becoming a monk, was chosen abbot of Fontenelle, and, in 819, abbot of Ghent. Emma died in 836, to his great affliction, as appears from the letters of Lupus, abbot of Ferrieres, to him. This great man, in 827, sent his secretary to Rome, to procure from pope Gregory IV. some relies of martyrs to enrich the monasteries which he had founded or repaired. The pope sent him the bodies of SS. Marcellinus and Peter, which Eginhard translated to Strasburg. But soon after he deposited them first at Michlenstad; and afterwards at Malinheim, since called Selgenstad, three leagues from Frankfort, and two from Achaffenburg; where, in 829, he built to their honor a church and monastery, of which he died the first abbot. Besides the life of Charlemagne, and the annals of France, during the reigns of Pepin, Charlemagne, and Louis Debonnaire, he wrote four books in prose, and one in verse, on the translation of SS. Marcellinus and Peter. This translation is also mentioned by Sigebert, Aymoinus, Rabanus Maurus, &c. Pope Gregory the Great preached his twenty homilies on the gospels in the church of SS. Marcellinus and Peter at Rome; as appears from some of them, and from the testimony of John the Deacon.4 See their acts and the history of their translation in Papebroke, t. 1, Junij, p. 170, and Laderchius, Diss. de Basilicis, SS. Marcellini and Petri; Romae, 1705