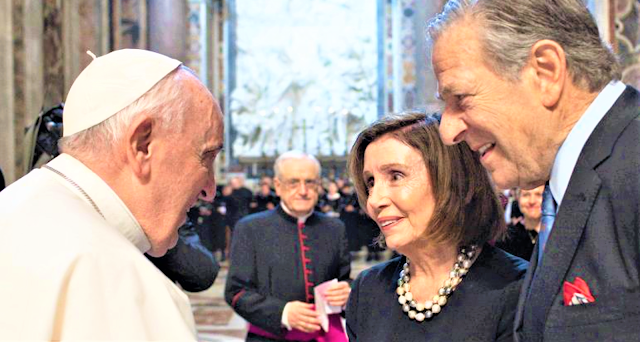 Nancy Pelosi, the US Speaker of the House of Representatives, received communion at a papal Mass in St. Peter’s Basilica, but not from Pope Francis, rather from a priest serving at the Mass.
The Associated Press, caused controversy by reporting that Pelosi was seated in the diplomatic section, and received Communion with the others present.
Rome Reports posted a video, see below, showing Nancy and her husband at the June 29th Mass. They reported that the "...priest distributing communion may not have known who she was, seeing as there were many priests of several nationalities serving at the Mass."  Nancy Pelosi has strongly supported abortion rights in the USA and was recently banned by her local archbishop from receiving Holy Communion. In San Francisco, her city of residence, Archbishop Salvatore Cordileone, told the Speaker that she was not permitted to receive Holy Communion due to her position on abortion. “You are not to be admitted to Holy Communion until such time as you publicly repudiate your advocacy for the legitimacy of abotion,” the Archbishop said in a public letter. She is now on a family vacation in Rome, and met with Pope Francis before attending papal Mass for the feast of Saints Peter and Paul as seen in the Vatican Media photo above that was screenshot from Twitter.