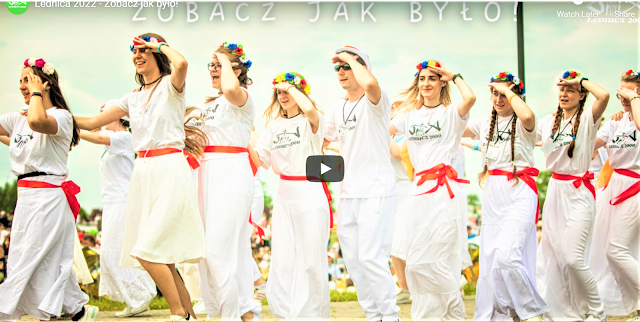 The XXVI national Catholic meeting of young people took place on Saturday June 4, 2022. Over 20 thousand people gathered in the fields of Lednica, Poland. Young people from all over Poland keep coming. The slogan of this year's Lednica was: "To the ends of the world". From the morning on, there was music in the fields of Lednice, there is no shortage of singing and dancing, choreographic compositions and ballet. The weather is good. Organizer  Father Tomasz Nowak, OP said, “Many of us have taken under our roof mothers with children fleeing the drama of war. We welcomed them like family. That’s why we also want to pray together here in Ukrainian — for the miracle of peace in Ukraine.” Pope Francis sent his blessing to the meeting after his General Audience on June 1st.
In the afternoon, Jan Mela, a disabled Polish traveler and social activist, who is the youngest ever conqueror of both poles and the first disabled person to do so, talked about his life and experience of faith. Jan Mela emphasized how important the presence of other people around us is in life. He encouraged us not to be passive, but to actively participate in life, to overcome our weaknesses: “God gave me people who showed me by their example that as long as we are alive, we have an influence on our lives. And every thing happens for something. Even the most difficult experience can be a gift for us, it can teach us something. I met people who inspired me not to look at my limitations. Because we are not made up of our flaws, our problems, our limitations, it only determines who we are in our lives. (…) We often limit ourselves in our lives. When I met people who believed in me, who gave me a chance to fight for my life, I realized that every weakness can be turned into your strength. "
When Lednica was officially opened, they began with the hymn of the "third millennium", to which the music was composed by Wiesław Wolnik, and the words were written by Agnieszka Chrostowska. In his greeting, the Primate of Poland addressed a special greeting to the Ukrainian youth, wishing Ukraine and the whole world peace.
In turn, Archbishop Stanisław Gądecki gave a short reflection on this year's slogan about going "to the ends of the world". He mentioned Fr. Jan Gora, "who set in motion this great Lednica movement, which still exists today and which exists despite his death". He thanked Father Tomasz Nowak, OP, who undertook to lead Lednica further. The chairman of the Episcopate thanked many people from the Lednica Association who were involved in the preparation of today's meeting. The Holy Mass was presided by Archbishop Wojciech Polak, Primate of Poland. The homily was delivered by Archbishop Grzegorz Ryś. https://www.gosc.pl/doc/7599932.Na-Polach-Lednickich-trwa-ogolnopolskie-spotkanie-mlodziezy