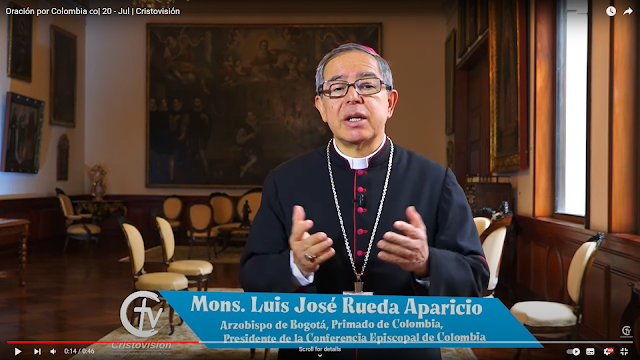 Bogotá, Colombia, celebrated Colombian Independence Day on July 20th, 2022. The Archbishop of Bogotá, Mons. Luis José Rueda Aparicio asked everyone to join in prayer. He gave a special homily for the Mass and the Te Deum was sung. (See Full 2nd Video below) This was the 212th anniversary of Colombia’s independence from Spain.
In the main cathedral of Bogotá the celebration was held in commemoration of the independence of Colombia, presided over by  Archbishop Monsignor Luis José Rueda Aparicio. There, the youth philharmonic choir and the adult choir of the Primate Cathedral  participated. In this thanksgiving to the Lord, the traditional Te Deum was sung.
“We invite you to join in praying from your homes, from your workplaces for our country, for Colombia. From the Primate Cathedral of Bogotá we will have the celebration of the Eucharist and we will have the Te Deum, asking Christ Jesus, the God of history, to give us peace, reconciliation and to allow us to work together on paths of salvation”, indicated Monsignor Wheel.
In his homily the archbishops spoke of three principles: live joyfully in hope, be patient in suffering and persevering in prayer. "First, we are called to persevere in all our things, praying for Colombia. Let fathers and mothers make their homes schools of prayer, small churches of love in prayer, let us not tire of praying, prayer is powerful", said Monsignor Rueda Aparicio. Secondly, he explained, "active patience is needed to take on the suffering of each day, without aggressiveness, without pessimism, all families and all societies in the world have problems, let us seek that fraternity flourish in our fields and cities, encounter and dialogue, may fraternal love flourish, which is braver and more powerful than war itself". Then, he recommended to all "live joyfully in hope, which is what the apostle Saint Paul proposes to us, let us live joyfully in hope". He gave an appeal to families and the entire country: "Colombia, do not forget God! when we forget God, when a country forgets God it goes to ruin, it destroys itself. To seek God is to seek hope".
Origins of the Te Deum
From the Latin: "To you, God", is one of the first Christian hymns, traditional thanksgiving. It is usually sung at times of celebration. Originally composed in Latin, the name is because that is how its first verse begins: Te Deum laudamus...
Click LINK to Watch the Mass on the FB Page of the Archdiocese:
https://www.facebook.com/Cristovision.co/videos/789007155453894/
It is also called the “Ambrosian Hymn”, composed jointly by Saint Ambrose of Milan and Saint Augustine of Hippo: in the year 387. When Saint Augustine received baptism from Saint Ambrose, the latter, moved by the Holy Spirit, improvised the hymn and Agustín was responding to his verses.
However, other versions claim that the Te Deum was actually written in the fourth century by Aniceto de Remesiana. Therefore, its origin probably dates back to the first half of the fourth century. Aniceto, was a Dacian Greek religious by birth, who lived in the fourth century. He is venerated as a saint by various Christian denominations. His name, derived from the goddess Nikn (Níke), means "victorious". When is the Te Deum sung ?
This hymn is used by the Roman Catholic Church, in the Office of Readings framed in the Liturgy of the Hours. It is also often sung at masses celebrated on special occasions, such as canonization ceremonies, the ordination of priests, royal proclamations.
It is sung by cardinals after the election of a pope. Later, the faithful from all over the world to thank for the new pope, sing this hymn in the cathedrals. In some countries, a thanksgiving ceremony is also held under the name of Te Deum , on the occasion of their national holidays. This is the case in Argentina, Bolivia, Chile, Colombia, Ecuador, Guatemala, Panama, Paraguay, Peru and the Dominican Republic.